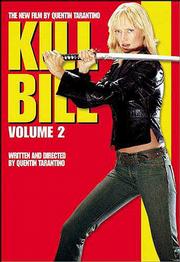 Filmmaker Quentin Tarantino claimed this week that he may have ruined Uma Thurman's chances for getting an Academy Award nomination by splitting his "Kill Bill" into two separate movies. On the strength of Thurman's performance in this second installment (which was released on DVD this Tuesday), that shouldn't matter.

The 6-foot actress is terrific as the vengeful Bride (whose real name is finally revealed) who goes on "what the movie advertisements call a roaring rampage" against the gang that murdered her wedding party and left her for dead.

As with "Vol. 1," Tarantino assembles a pop culture pastiche of different styles and influences unlike any other film in history. Who else but Tarantino could comfortably fuse kung fu, spaghetti westerns, samurai, Hitchcockian thrillers, anime, blaxploitation and countless other genres that few are geeky enough to recognize?

It's not that this latest flick is necessarily better than the first -- in terms of pure kineticism, it's decidedly weaker -- but its presence makes the entire project seem more like a cohesive artistic vision.

Whereas Tarantino broke up the action scenes with dialogue in "Vol. 1," he breaks up the dialogue scenes with action in "Vol. 2." This results in a much slower-paced affair. And even in hypnotic parleys such as the flashback to Bill (David Carradine) and the Bride at her pre-massacre wedding rehearsal, the chatting often outstays its welcome.

Fortunately, there's one element absent from the first that is in full force here: suspense.

Among the most memorable is a flashback to the Bride's tutelage by a cruel Chinese martial arts master played by Gordon Liu. (Tarantino himself provides the dubbed voice of the warrior.) She is told he "hates Caucasians, despises Americans and has nothing but contempt for women," and the ancient -- yet marvelously spry -- man puts her through excruciating training.

Some of which comes in handy in the film's most tension-filled sequence when one of her enemies takes a page from Edgar Allan Poe and gives her a premature burial. Tarantino shoots these moments in total darkness with only the horrifying sounds of a backhoe dumping dirt on the casket.

Now that the entire scope of both films are revealed it's easier to evaluate Thurman's performance, and she really is outstanding. The athleticism and humor she displayed in the first half is balanced by real depth of emotion in this one. Just witness how believable she is during her casket episode. She strikes a sympathetic balance between terrified, enraged and "this can't possibly be happening to me."

On the strength of "Kill Bill Vol. 2," she just might nab that elusive Oscar nomination.