Last year, when I booted up Madden 2004 and heard Al Michaels' voice, I thought I was in heaven. The solid gameplay of Madden mixed with one of my favorite football commentators was surely a great touch. This year, Madden gets live on Xbox and we get to use the new "hit stick." So does the best selling football franchise have what it takes to bring down the impeccable ESPN offering this year? 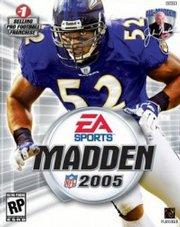 The answer is yes and no. EA has more years under its belt, fine-tuning gameplay mechanics to represent the actual game of football. This year, Madden has the right analog stick act as the "hit stick," enabling the user to apply a big hit on his opponent. Before you think this sounds too arcade-like, know that if you don't time it correctly, you will completely miss the tackle, enabling the ball-carrier to get tons of running room.

Also new is the defensive playmaker controls. You can assign double-teams and different coverage on the fly. This is incredibly helpful as we saw in ESPN and is a much welcome addition. Add a new create-a-fan mode, rewards for coaches to give to players, local newspapers that tout your win and Tony Bruno's radio show (that you watch), and you have a season jam-packed with new features and presentation.

Okay, so time to take it to the field. One thing I noticed immediately was that the game's pace is much faster. Almost every kick returner had no problem getting to the 30 yard line without being touched. Conversely, when you run the ball, the run defense is harder to break. Even if you have Clinton Portis or Priest Holmes against a paltry defense, it is still pretty tough. Passing is also a more precise science since every pass defense in the league seems to have a sixth sense of where the ball is thrown. I am all for realism, but I felt some of the team accuracy was lost in the "tightening" of the defensive AI.

The graphics are the same pasty-faced cutouts with sketchy character models that we've all become ironically fond of. The new lighting engine looks great, but it's still on a very dated canvas. The animations are a mixed bag. The tackling sequences are incredibly lifelike. However, the transitions between those sequences still stutter, breaking up the flow, just like last year. There are some new things to see, but the heart remains the same 'ol.

The commentary always benefits from the presence of Al Michaels and not so much with "Tough actin' Tinactin" Madden. Unfortunately, I heard much of last year's catch phrases in my very first game, which was entirely disappointing. Neither Madden nor ESPN shine in the commentary section this year.

After you get used to the new defensive era of Madden, the game plays very well. It still retains that fun factor you've always known and loved. Although its franchise mode dives deeper than ESPN, the feature set doesn't suck you in and make you want to return as much as ESPN's cohesive package. If you are a multi-season junkie who wants to wring out every little drop from the coaching sponge, then Madden will be worth the extra $30. It's still a fine game of football.