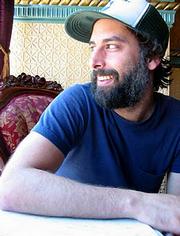 As far as songwriters go, Christopher Crisci is extraordinarily candid. The lead singer and songwriter of The Appleseed Cast has made a living off of opening his heart and spilling its contents all over his band's records, leaving the listener with intimate portraits of his most personal conflicts.

Perhaps that's why Crisci decided to write fictitiously when composing the debut album for Old Canes, his folk-oriented side project.

At least we can hope he was writing fictitiously.

"It's just a story ... drunk guy has a wife he doesn't pay attention to; wife finds some other dude; guy gets a gun and blows him away," Crisci explains. "Just typical everyday stuff."

True, most of Crisci's comments are followed by maniacal laughter, begging the question of whether he's speaking the whole truth. But as the old saying goes, there's a little truth in every joke, and Old Canes' "Early Morning Hymns" is likely no exception.

"Maybe I just wanted to write about somebody whose life is worse than mine," Crisci postulates, grinning slyly. "On second thought, maybe we shouldn't print anything about what it's about."

Hokey hymnals
"Early Morning Hymns" represents a dramatic new direction for Crisci, who, incidentally, is not married and has never owned a gun. Rather than rely on the amped-up assault of Appleseed Cast, Old Canes employs acoustic guitars, trumpets, banjos and minimal percussion to create an indie-rock sound rooted in folk traditions.

"It's nothing like Appleseed," Crisci explains. "There's hokey elements to it ... blatantly happy-sounding parts that usually I don't write. There's a ton of folk in it, a ton of indie rock, a little bit of bluegrass and the tiniest pinch of country."

The seeds of Old Canes were planted years ago, Crisci explains, as melodies he wrote on an acoustic guitar. Never intending to release them or even write words for many of them, Crisci was inspired to take the project more seriously after performing some of the songs at an impromptu Appleseed Cast in-store performance during a European tour.

"They wanted us to play acoustic and we were like, 'We don't do that,'" Crisci says. "I played three what-would-end-up-being Old Canes songs and our booking agent over there was like, 'Man, you have to record that.'"

Inspired by the prospect of a second songwriting vehicle, Crisci hunted down some old friends - including Jordan Geiger from the Minus Story and a rotating cast of drummers - and pitched the idea to Dan Askew, owner of Kansas City's Second Nature Recordings.

"I said look, how about this: You buy me an 8-track reel-to-reel tape machine and I will record the album on that," Crisci recalls. "If you decide you don't want to do the album, you still have that machine to resell so you won't have lost any money ... But if you like it and you want to put it out, then the machine's mine."

The basement tapes
Askew agreed to the deal and Crisci began the lengthy process of recording the album in his newly equipped home studio. The sessions lasted nearly four months, with plenty of time spent reworking and remixing tunes.

"The recording should have taken a month at the most, but it ended up just going on and on," Crisci says. "It was probably the most fun I've had recording anything ever, just because I had full control over everything that was happening."

The resulting 10-song album actually sounds quite polished, compared to hallmark lo-fi albums by bands like Guided By Voices or Sebadoh. Though Second Nature urged Crisci to enlist a respected producer like Ed Rose to mix the album, Crisci insisted on doing it himself.

"I kept on bringing up albums that everyone loves that are poorly recorded," Crisci says. "Jimi Hendrix - his albums sound like crap. The early Bob Dylan stuff sounds like crap. Led Zeppelin albums ... when they finally sounded produced the songs sucked, but most of their great songs are badly recorded."

Minus Story frontman and former Appleseed Cast keyboardist Jordan Geiger may be the ace-in-the-hole of "Early Morning Hymns," contributing toy piano, bells, trumpet and percussion. Geiger joined the band about two years ago after an Appleseed Cast / Mates of State tour.

"There's just an incredibly joyful feeling that I get from it," Geiger says. "It reminds me of music that could be played at almost any time during the 20th century and people would like it. The instruments might be a little different and the style of playing, but the songs themselves, like what they're talking about ... everything just has a really truthful ring to it for me."

"I don't know if my grandparents have heard Old Canes, but I imagine if I played it for them I think they would understand it just as much as a young kid might understand it."

The album also features the nimble drumming of Nathan "Junior" Richardson, best known as the heavy-hitting stickman for The Casket Lottery. Since Richardson is usually out on the road with any number of bands, The Minus Story's Tyler French and local drummer Aaron Coker also pitch in for local shows and touring.

"It's kind of whoever is available and wants to do it," Crisci says.

Porcelain God worship
Old Canes' first release comes at an opportunistic time, as The Appleseed Cast is on indefinite hiatus while the band breaks in a new drummer (Richardson) and searches for a new label. Tigerstyle, which released The Appleseed Cast's last album "Two Conversations," is on hiatus from putting out new releases and has encouraged its bands to look elsewhere.

According to Crisci, the members of Appleseed have all been supportive of Old Canes.

"No one's feeling any competition or anything," says Crisci, adding that guitarist Aaron Pillar's "Hundred Hands" project was also encouraged by band members. "Maybe doing something so different will help Appleseed be open to new ideas."

In the meantime, Crisci may have to prove himself all over again as Old Canes embarks on a month-long tour of the West Coast with Chicago band The Race.

Thanks to Mordam Distribution, Old Canes' debut is already in stores across the United States and Europe. The album sold more than a thousand copies in its first two weeks of release, indicating that Crisci may not have to sing any "Early Morning Hymns" as a result of poor reception.

"It means throwing up ... you know, 'worshipping the porcelain God,'" he explains. "Basically the guy wakes up and doesn't remember the night before and is feeling sick and he's supposed to go to the bathroom and sing 'early morning hymns.'"