When the Victor Continental show announced two years ago that its Christmas performance would be its last, the end was in sight for popular segments like Shitty Deal Puppet Theater, The Justice League of Lawrence and general lampoonery at the expense of Lawrence.

"I just have not had sex in Lawrence for so long," said Mr. Continental, the enigmatic, so-bad-that-he's-good schmooze artist portrayed by Lawrence actor Jerry Mitchell.

"This is the sexiest place in the world," Continental continued. "There is just some kind of freedom in the air ... a certain open sexuality. It's just beautiful."

Victor's return marks a reunion of sorts for the core cast of Card Table Theater, founded in 1998 by Lawrence actor/writers Mitchell, Will Averill, Paul Rosen and Jeremy Auman. The troupe split in 2002 when several members moved away, including Averill, who moved with his wife to England.

"We made a deal that we would never do the show unless all four of us could be involved," Auman said. "Keeping a core group of actors together has really helped make the shows much tighter, more organized and funnier, frankly."

Dubbed "Victor Comes Again," the 11th Victor show will feature all of the in-your-face raunchiness and locally themed humor that has characterized past productions. Favorite characters like "Mid-'20s-and-still-in-Lawrence-guy" and "Rebound Girl" will likely make appearances. Also new sketches like "Fahrenheit 4:20" will debut.

"It's kind of a spoof of the Michael Moore film and hippie culture," said Auman, adding that the smoking ban and leash laws would also be likely targets. "Everybody is open season, including ourselves."

The 90-minute extravaganza also features original show-stoppers composed by music director Rosen, Averill and his dad Ric. As numbers like "Victor Comes Again" might suggest, The Victor Orchestra has a predilection for racy humor packed with double-entendre.

"I'm sure that there's been one or two audience members that have been pushed a little past their comfort zone, but nothing to the point where they felt like they had to say something to us," Rosen said. "It's done so obviously in jest that I don't think anyone takes it for more than the satire that it is."

Lampooning Lawrence
In some ways, the Victor show is typical sketch comedy -- everything from ancient history to U.S. politics, from Hollywood to Lawrence is fair game.

But then, typical sketch comedy shows aren't hosted by a slick gigolo with a mean Martini streak onstage and a propensity for vulgarity. Nor do they feature segments like "Shitty Deal Puppet Theater," a crass, no-budget puppet show hosted by a gin-loving wino named Mr. Doper and a burp-happy green puppet named - you guessed it - Mr. Burp. 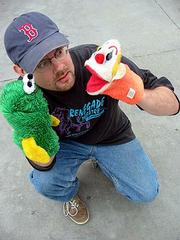 As founding member and co-lead writer Averill tells it, Shitty Deal was actually based on a routine he did as a child at parties for his parents' hippie friends.

"They were a great audience," he said. "In retrospect it was probably because they were high the whole time."

Though Averill would "neither confirm nor deny" that he expects the same from audience members attending this weekend's shows at Liberty Hall, near sellout crowds for the last three Victor shows indicate that it's probably funny with or without the aid of psychotropics.

Then again, according to Shitty Deal Puppet Theater's "Complete Guide to Lawrence," the wacky tobaccy actually plays a pivotal role in Lawrence's history. 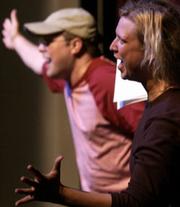 Victor Continental show actors Andy Morton and Kitty Mitchell pause for an applause line after one of their punchlines.

"Basically the theory is that it was settled by a bunch of abolitionist stoners who just got high and ended up here," Averill said.

"Which is what everybody has done since."

Victor International
With Victor alum flying in from England, Los Angeles and Washington D.C., the cast will have its hands full preparing the largely scripted show with just two weeks' worth of nightly rehearsals.

One character who won't have to work too hard, however, is Victor.

"I come in two days before opening night and I watch some of the bits and I write down some notes," says Mitchell, who improvises much of his narration. "It's best if I don't know what's going on."

Despite his crassness and general disregard for good taste, Victor usually manages to charm with his undeniable wit and unshakable self-confidence. 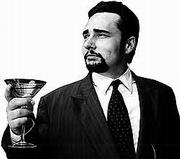 "Women seem to be the biggest lovers of Victor, because Victor says things that no one else could get away with saying," Mitchell said. "You put on a tuxedo and dye your hair black and get a big pompadour and you can't lose."

Veteran VC actress Kari Jackson said she liked doing the show because she gets to portray off-the-wall characters.

"Traditionally, theater and movies have just been an old boy's club," said Jackson, a mother and real estate agent by day. "It's just amazing to see us pack Liberty Hall for the last three shows ... We always hoped, but it's really turned into something special."

Victor Continental, as portrayed by Lawrence actor Jerry Mitchell, who moonlights as a bartender at the Pool Room.