Los Angeles — Broadcast networks are in big trouble this season if federal regulators add being derivative to the list of TV trespasses.

Networks are copying their own series, sometimes with a third or fourth edition ("CSI," "Law & Order") or putting on shows that have the whiff of copycat about them ("The Contender" vs. "The Next Great Champ").

Television is used to milking ideas for all they're worth, but the trend is nearly overwhelming in the 2004-05 season -- nearly, but not quite. 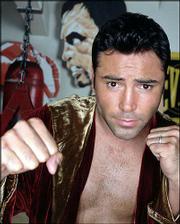 Oscar De La Hoya, shown in this undated publicity photo, mentors boxers to become fighters in the Fox's "The Next Great Champ," which premieres at 8 p.m. Sept. 7.