Our 2003 Game of the Year finally hits the PS2 console...and man, does it still rock.

Capcom reveled in so much glory last year with its innovative and incredibly fun Viewtiful Joe for the Gamecube. It snagged many "Game of the Year" titles, including ours, and it surely deserved it. Now that the dust has settled, Capcom is going to get the most money out of the project and bring it to the PS2. Does the port play just as well? 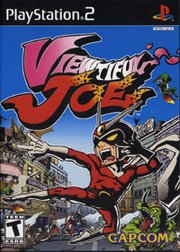 The whole presentation is captured on the PS2 as beautifully as it was on the Cube, with some very minor slowdown. This B-movie-like action film packed with over-the-top style and cheesy humor still endears. Joe learns certain VFX (visual effects) such as slow-motion, mach speed and zoom. These modes use his "viewtiful" energy that recharges when not in use. It is in these modes where the gameplay elements explode, building your own cool-looking combos, racking up points to buy more abilities at the end of the level. Sometimes there is so much action on screen that onlookers may wonder how you know what you're doing. It is in this instance when you feel in total control and ultimately satisfied with the seemingly endless amount of gameplay afforded by Capcom's brilliant mechanics. If that wasn't enough, sometimes you pilot a ship, reminiscent of a cel-shaded R-Type.

Last year, Viewtiful Joe marked the return of the side-scroller in a major way. It avoided the common pitfalls of the modern side-scrollers not only with the wide variety of action options, but also in the strategic ways you use your abilities to solve minor puzzles. For instance, there is a huge barrel in your way. You can uppercut it, but it won't move that much. But use your slow motion to uppercut it, and the barrel soars upward much higher, giving you time to then use your mach speed to speed under the barrel. Even today, nothing compares to its innovation.

The bosses are amazingly varied. Fight helicopters to rapping reptiles. This game is awesome in its random glory. Some bosses reappear throughout the game. It would've been nice to see more types of enemies, but it's not any real distraction.

The game lasts long for a side-scroller. Especially because it's incredibly challenging in a "need to learn the level" sort of way. This version has Dante, the Devil May Cry hero, as a playable character. Even if there wasn't this extra goodness, the gameplay alone deems it worthy to replay over and over.

The cel-shaded art style is fully self-aware, not limited at all by the hardware. This is still an intriguing art style. Capcom didn't have to exclude anything from the graphics and it's still an amazing accomplishment! Overdrawn characters come off the screen as if it were a live pop-up book.

The soundtrack is a caffeine-infused techno/rock romp through this action packed extravaganza. No surround mode is supported but the stereo signals are clean and crisp, representing the awesome sound effects with pride.

Viewtiful Joe debuts on the PS2 for only $29.99. Even though it's almost a year old, it still stands out as one of the best games for this year. Add Devil May Cry's Dante as an unlockable character among many other surprises, it's worth going through again and definitely an imperative buy for PS2 owners that didn't go near a Gamecube.