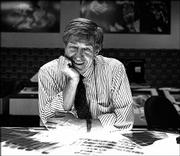 Journal-World senior editor Bill Snead got his start in newspapers as a teen in Lawrence, but his 50-year career has taken him places like United Press International, National Geographic and The Washington Post, where he's shown here. A retrospective of his photos opens Friday at Image Point Gallery in Kansas City, Mo.

Legendary Washington Post editor Ben Bradlee was talking about his autobiography, "A Good Life," which heralds his adventures as a reporter and editor way before and beyond Watergate.

"If you think, at age 70-plus, that it doesn't take guts to try to recall a lifetime in this business ... just wait, buddy," he said, laughing.

Today, I know what he was saying.

I'm in the process of pulling together a photo show, something that will represent 50 years worth of published pictures. Sorting through old boxes of poorly labeled negatives and slides has turned long evenings into Christmases. For quality and retrievability reasons, the early photos didn't make the cut.

Sixty or so memorable others did, however. The collection, "From Kansas to Yonder and Back," opens Friday.

My adventure in journalism began in 1954 when I was a senior at Lawrence High School. I was a part-timer mixing chemicals and doing engravings for the Journal-World.

My boss and one-man photo staff Rich Clarkson soon turned me loose on Lawrence with a 4-by-5 inch Speed Graphic. It used flash bulbs the size of 100-watt light bulbs.

At 17, I was getting an early start on a wonderful career.

Big time and back
While still a teenager, I became THE photo staff at the Journal-World. I was responsible for the daily front-page picture, plus shooting sports and chasing news. My learning curve was all over the place. But I graduated from a Speed Graphic to a Roliflex, a much smaller camera.

My trail out of Lawrence passed through the Topeka Capital-Journal, and five years later I landed in Wilmington, Del., at the News-Journal, running my first photo department. I remember being at a Beatles press conference in Philadelphia, where the press corps was pushing and shoving, thinking I wasn't in Kansas any more.

In 1967 I couldn't say no when United Press International called and asked if I'd like to run its photo bureau in Vietnam. Assigning photographers to stories that got them killed or wounded was something I'd never done nor ever want to do again. But it's an experience I wouldn't trade for anything.

In 1969, I was in UPI's Chicago bureau long enough to cover Joe Namath in the New York Jets' exhibition game with the college all-star team. I shot the game for 15 minutes, rushing back to the bureau to make East Coast deadlines. That was quality time for a wire service photographer in those days. Namath won't make the exhibit, but a Chicago shot from the Miss Nude America contest will.

I moved on to National Geographic, working as a picture editor with some shooting. It was another growth experience to work in a class operation where ideas were warmly received by the editor, Bill Garrett.

Four years later, another phone call took me to The Washington Post, where I ran the photo and art departments. They were on a mission to overtake The New York Times as the best newspaper in America. Watergate got them there ahead of schedule.

Doesn't get better than this

The Beatle's press conference looked more the interior of a police station. They were surrounded by Philadelphia city officials and policemen. The performed later that evening at Constitution Hall in 1964. Top ticket prices were $5.50 and the upper balcony seats sold for $2.50.

After abandoning the administrative ranks at the Post, my 21 years worth of assignments included Super Bowls, the Chesapeake Bay, Eastern Europe, hurricanes, the White House and a snake-handling church in West Virginia. Many produced fodder for the photo show.

In 1991, I got into the area where a half-million Kurdish refugees were trapped on a mountain between Iraq and Turkey. By transmitting via generator-powered satellite, The Washington Post was the only paper in America running daily photos from the biggest story in the world. Post editors believed the photographs pressured The White House to send help to the Kurds.

The following year those pictures made me runner-up for a Pulitzer Prize and were included in my portfolio that won White House Photographer of the Year.

In 1993, after running into Journal-World publisher Dolph Simons Jr. at Washington National Airport, I returned to the Journal-World to run the newsroom.

Now, as senior editor, I get to write stories and make images with digital cameras.

It really doesn't get any better than this.