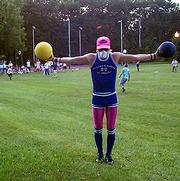 Kyle Batten takes his field fashions as seriously as the game and is known for wearing unique, form-fitting outfits, both as an aerodynamic aid and as a visual distraction for the opposing team.

Kickball. The instructions are pretty simple. Add "run base" and you've got a pretty clear picture of how the game is played.

Once exclusively the domain of grade schoolers at recess, adult kickball leagues have been sprouting up nationwide the past few years. Lawrence's version -- the Kaw Valley Kickball League, comprised mostly of employees and friends of downtown establishments -- has seen a growth in popularity this season, resulting in a few growing pains and assuring this year's impending playoffs to be a series of stellar games.

The league began three years ago with eight teams and has spiked to 20 this year. After three months of weekly games, the field has been narrowed down to the final four.

"Kickball is our game," said Kyle Batten, a three-year kickball veteran whose team KJensenHK goes up against Papa Keno's in this Sunday's semifinals. "Papa Keno's is probably the best team in the league right now. They have fraternity dudes that are jocks and have played a lot of high school ball -- definitely a team to take seriously."

The other semifinal will pit The Bourgeois Pig -- who narrowly beat Sun Creations in Sunday's playoff -- against the Love Garden, who beat defending champs Bottleneck last week.

"We've got some great runners," said Love Garden team member Kelly Corcoran, who also serves as Kickball Commissioner. "Our real asset is just to put people on the bases and run aggressively."

As commissioner, Corcoran has had a few more things to deal with this year than just scheduling volunteer referees and keeping track of the stats. The league growth has led to increased competitiveness, resulting in a number of intense disputes and even a referee being threatened.

"Too many teams don't a have a positive camaraderie when things are going poorly," said Corcoran. "You can't win every game. That's not what it's about."

Corcoran hopes to institute some formal repercussions for dealing with altercations next season and perhaps require teams to have a quota of female members. "I'm more interested in being inclusive and letting the league be fun rather than competitive and cut throat."

Watching the games has proved to be almost as popular as playing them. The number of spectators attending the games has increased as the season has progressed. People bring lawn chairs, blankets and snacks and set up camp to cheer on their favorite business.

Those interested in playing kickball next season will have two leagues to choose from.
The popularity of the game has prompted the city to start a league with a cost of $175 per team. Those interested in registering for the spring city league should contact Tim Laurent at 832-7920 for more information. The Kaw Valley Kickball League is free; for more info contact Kelly Corcoran at kcorcoran@elvis.com. Both leagues will be forming teams next March.