The art of awareness

With all the focus on the AIDS pandemic in developing countries -- and all the U.S. money being funneled to foreign destinations to help relieve that pandemic -- Geri Summers worries Americans have lowered their guard to the dangers of the disease in their own back yard.

"What we've seen is escalated behaviors, especially among that young group, where their risk-taking behaviors are increasing because the attention is in Africa or China, and they think they're above having that experience," said Summers, executive director of Douglas County AIDS Project.

"What stays consistent is that people between the ages of 15 to 25 are the folks that are mostly getting infected," she added. "And the reason the World AIDS Day theme is Women and HIV this year is because, for the first time, women are almost half of all HIV infections."

All reasons why it's so important for DCAP to spread the word about AIDS prevention in the Douglas County area, where the agency serves about 65 HIV-positive clients.

The annual Red Ribbon Art Auction, DCAP's biggest fund-raiser each year, is the organization's best chance to augment the funds -- which have shrunk about $30,000 in the past two years -- it receives from the state and federal government. 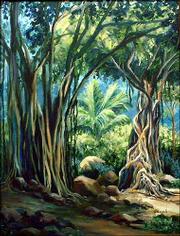 "Enchanted Forest," a painting by Lawrence artist Jewell Willhite, is among the pieces to be auctioned at the Douglas County AIDS Project's 2004 Red Ribbon Art Auction. The auction, which raises money for the Lawrence social service agency, will be Sunday at Maceli's, 1031 N.H.

The festive event is also a time to enjoy the company of like-minded people who support the fight against AIDS, munch on hors d'oeuvres, sip wine and buy some great artwork.

Nearly 60 pieces have been donated for this year's auction, which moves to a new location: Maceli's, 1031 N.H. Artworks range from paintings to sculptures, weavings to prints. Lawrence woodworker Tim Carpenter, a former DCAP board member, has donated a pair of handcrafted wooden chairs that will be raffled off at the auction; raffle tickets are $10.

One of the chairs, along with many other works that will be auctioned, are on display at Olive Gallery and Art Supply, 15 E. Eighth St.; Prairie Pond Studio, 809 Mass.; and The Casbah, 803 Mass. The work also can be previewed at DCAP's Web site: www.douglascountyaidsproject.org.

The venue isn't the only change for this year's auction. DCAP and other local nonprofits who rely on benefit art auctions to raise money have taken some heat in recent years for "taking advantage" of local artists who already struggle to make ends meet.

In response to those concerns, the DCAP board invited artists to share their opinions and strategies during a focus group.

"We had a real concern to make sure that the artists felt appreciated and that we could do as much as we could do to muster up business for them," Summers said.

Among the changes: DCAP board members used their connections in other parts of the country to dip into a broader pool of artists, placing less stress on the local flock. All donating artists and their contact information will be listed in the program for auction-goers who want to further patronize those artists. And the artists who attend the auction will be wearing nametags so buyers can identify the makers as they browse the art.

DCAP hopes to raise $15,000, all of which will help buttress its programs, which provide case management, outreach and education services, and HIV testing.