For certain Hollywood actors, the nature of effects-driven blockbusters means having to spend more time in front of green screens than at actual locations.

So for the stars of "Closer," it must be nice to have an opportunity to deal in words.

"It's just lovely to be involved in a movie that does go back to the basics: characters, great writing," says Clive Owen. "You go back to those films of the '40s and '50s and hear the dialogue, the way the people played off each other, the wordplay. I think we've really lost that in movies."

That missing element is resurrected in "Closer," an adaptation of Patrick Marber's play about two London couples and the buried sexual warfare they endure. The film (which opens today nationwide) offers the kind of seething, bitter, emotion-drenched dialogue that viewers will remember long after they've left the theater.

Castmates Owen, Jude Law and Natalie Portman gathered together for several press sessions Nov. 22 in Beverly Hills to discuss their roles. (Co-star Julia Roberts excused herself from interview duties due to her pregnancy.)

"I think the words walk a very fine line of being very dramatic and other times unbelievably realistic," says Law. "Personally, to me that's what it's all about: great words."

It's often vicious words as well. The characters -- a failed novelist, a stripper, a photographer and a dermatologist -- are not the most sympathetic people. Their actions often maneuver from cold-blooded to borderline evil.

Portman admits, "Some of the things are really hard to do to each other because -- I think I can say this for all of us -- we got along well and liked each other a lot. To be really awful to each other was very difficult at times."

Clips of press conference with the stars of Closer:

For the young performer best known for her ongoing gig as Queen Amidala in the recent "Star Wars" prequels, it provided a chance to flaunt her range, among other things. The film's press notes even claim that it's her "arrival as an adult actress."

"I disagree," she says. "I don't really feel like an adult yet myself. I don't think I can play adults. I think it's always a proportion of adult to child within you. Even when you're 85 you're still going to have that proportion."

That said, Portman was taught the racy art of pole dancing for a scene with Owen set in a private strip club.

"No, I'm extraordinarily flexible," she says.

"I'm that much older (now) so I don't think Dan was ever an option," Owen explains. "And Jude was already cast as Dan in the movie, so I was thrilled. I think it's four fantastic parts. ... To be involved in any way was hugely exciting for me.

Owen, rumored to be a frontrunner to take over the James Bond franchise, found the play's strengths to translate well to the big screen.

"I'm sort of one of those weird actors who whenever I do a play, I think, 'Oh, we should film this!'" he says. "As opposed to have to belt it out of ourselves in a theater auditorium. So it became unusually even more insular on camera, I found. It becomes even to some extent more powerful than the theater because it's hugely intimate."

Oscar-winning director Mike Nichols ("The Graduate") came onboard to helm the project. He put the cast through extensive rehearsals, not that different from preparing for a stage production.

"It was like English class," says Portman, who graduated from Harvard last year. 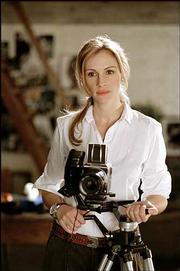 "It's an amalgamation of the high points, the dramas of life. ... I think if you do look back 10 years ago (when talking) about a relationship, you say, "Well, yeah, I met her at this garden party and anyway, four years later we split up.' You don't necessarily go through that whole four years of memories."

While the film is already receiving raves from the press, the explicit language and subject matter does open it up to criticism. There are those who will inevitably view the work as misanthropic or possibly misogynistic.

"First of all, I don't think that four characters necessarily extend to their entire gender," says Portman. "I think there are variations within humanity that (aren't) epitomes or types that represent their entire sex. And second of all, if that's the conclusion you come to, YOU can think about it. I don't need to teach you or tell you, you know? That's the beauty of a piece that's full of the inspiration of questions like this that makes you go home and think about that. I could talk for hours about why."

Portman has plenty of time to chat these days because she no longer is shackled to the lingering grind of working on the "Star Wars" series.

"It was a big chunk of my life," she explains. "It was like 10 years from the time I signed on to when the next film comes out. As with all phase changes in life, it's sad because you're not going to go back and see the same people, and exciting as to what is ahead."

Hopefully, for her there are more projects like "Closer" on the horizon.

She says, "It's always a sign that I should do something if it scares me."