The best game ever to be released with the name Rogue Agent? Find out. 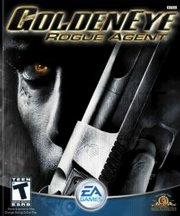 Goldeneye for the Nintendo 64 sparked a new interest in multiplayer first-person shooters on consoles. Developed by Rare, Nintendo had a great product on its hands. Rare went on to lose the James Bond license, but releasing the critically acclaimed Perfect Dark, a Bond-ish game with a sexy heroine. EA bought the license and defaced the Bond name with several cruddy Goldeneye knock-offs. They got better as they went along, peaking at Everything or Nothing, a good change to the third-person perspective.

Now we have EA trying to capitalize on the Goldeneye name, releasing a "sequel" that pits you against the good guys:in theory. Yeah. Not to mention they pushed the release date back to follow the biggest console first-person shooter in history:Halo 2. But don't worry, keep playing Halo 2. Goldeneye: Rogue Agent is run-of-the-mill blah.

Critical to any console first-person shooter is the control. If it can't be tight and responsive to analog sensitivity, it will be a dud, no matter how cool the ideas or presentation. Rogue Agent is a perfect example of how sluggish and maddening controls defeat almost any enjoyment that could've been had in the game. The turning speed at which your unlikable and underdeveloped character move is unpredictable. Acceleration kicks in at random intervals, making it near impossible to aim. Luckily, auto-aim is there to save the day so you may actually progress through the game. You will never be rewarded for anything but spraying a general area with an endless supply of bullets.

Like Halo, you may carry only two weapons at a time and grenades. Like Halo 2, you can dual wield. Unlike Halo 1 and 2, the weapons, variety, satisfaction, artificial intelligence and level design are all poor. The game plays like a community college game development project:from freshman.

A couple of items do add some interesting elements, however. MRI vision allows you to see through many objects. So when an enemy thinks he is hiding, you have the upper hand. Also, the Magnetic Induction Field is fairly fun. This allows you to magnetically throw enemies a la the underrated Psi-Ops, where the effect is much-better-implemented. Unfortunately, there is hardly ever an incentive to use these cool powers as most of the game can be completed by spraying and praying your way through the mundane and endless hallways, byways and poorly-textured auditoria.

The multiplayer component is too little, too late. Even if it weren't too late, it'd be incredibly cumbersome. Many of the 20 multiplayer maps are really general. Some of them cool, but when all matches boil down to whose auto-aim kicks in first, it loses its appeal almost instantly.

The graphics aren't good. From the uninspired weapon design to the cut and paste level design to the blurry, pre-generational textures and objects, Rogue Agent doesn't live up to even standards set in 2000. And when you jump into split-screen multiplayer, be prepared for a huge dip in textures and framerate. It looks absolutely awful. The sound is not bad. Actually, aside from the overused sound effects ripped straight from pre-recorded SFX CDs, the music and ambiance is fairly nice.

As you can tell, I really love Rogue Agent and think everyone should buy it:in two months when it's in the $4.99 bargain bin:to use as a coaster.