It's fitting that The Hives' tour itinerary listed the group's show in Lawrence as taking place at "The Grenada."

The Swedish band commandeered The Granada's stage Monday with the same rapid aggression as the U.S. invasion of the small island nation two decades ago.

Even though this concert clocked in at just more than an hour, the group created the illusion of a much longer performance by firing off rounds of two-minute songs in quick succession. They came, they saw, they conquered.

Formed in 1993 in Fagersta, Sweden, The Hives are the best known of the European acts who've popularized the garage-rock revival. Whether one is a fan of these bands or not, it's hard to argue that their high-octane antics and razor-sharp riffs aren't better suited for live consumption than the mopey indie rockers who tend to dominate the college charts.

Hives members proved well-versed at recreating the rock bravado of the 1970s. Lead singer Howlin' Pelle Almqvist showcased all the classic frontman moves: strutting, spitting, doing the splits and flinging his microphone around like a bullwhip. By the third song guitarist Nicholaus Arson (Almqvist's brother) was crowd surfing and constantly blowing on his fingertips as if his left hand were on fire.

Also included in this arena-rock throwback was the tongue-in-cheek ego-stroking of Almqvist, who behaved like an actor playing the role of a vain lead singer. 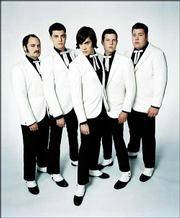 "I'd like to dedicate this song to all the people who AREN'T having fun," he told the capacity crowd. "But I love you all the same. That's something else I have in common with Jesus Christ."

The Hives were certainly among the most color-coordinated acts ever to set up camp in Lawrence.

The five members wore white shirts and colonel ties, with black shirts and pants. All their gear -- from instruments to amplifiers -- adopted the same dual shades. Even the sound crew and guitar techs were clad in nothing but black.

The only primary color represented on the stage was a red neon sign in cursive lettering that spelled out the band's name.

Performing tracks such as "No Pun Intended" and "Missing Link" from their July release, "Tyrannosaurus Hives," the five-piece exploited a talent for mixing clean-sounding bar-chords and aggressive backbeats. It was both gloriously retro and utterly contemporary.

In addition to a somewhat boomy mix, the worst that could be said about The Hives was the material revealed a noticeable sameness after awhile. But the constant movement in their live show ensured the performance never grew tiring.

The only point the musicians ever slowed down was during "Diabolic Scheme," when all the members froze in poses for more than a minute before breaking back into song. This statue-like interim only emphasized how much energy the Swedish invaders had been unleashing the whole evening.