As soon as the nasal and wholly inappropriate voice of Ryan Reynolds ("National Lampoon's Van Wilder") as Hannibal King opened the newest installment in the "Blade" series, I sensed this would be a different kind of movie than its bloody fun predecessors. "Blade: Trinity" is all the bloody, but without any of the fun.

Reynolds clues us in on the lame villain of "Blade: Trinity" right away by de-bunking the classy ideal of Dracula in the opening narration, and opting to paint a darker, scarier picture of the Dark Prince. But, more importantly, the actor serves up his No. 1 function for the entire film in this first scene. He is here to curse. Repeatedly. And in all kinds of supposedly hip and crazy ways. Imagine the silliest combination of your favorite swear words, and Reynolds puts them together in this film like a dirty rebus puzzle.

With his fake-looking beard and beady eyes, he already looks like a poor man's Jason Lee, but did he need to completely invade Lee's territory and produce witless trash-talk that's so bad even Kevin Smith would have thrown it out?

If you know anything of the "Blade" series, you know that vampire-killer Blade (Wesley Snipes) is a man of few words and lots of action. His partner, crusty old Whistler (Kris Kristofferson), is the kind of guy who is able to rattle off ridiculous dialogue like "You better hope nobody IDs you" after Blade causes a huge car wreck, wastes a ton of vampires and then kills a human in the middle of a busy street.

Wesley Snipes is back in the third and least fun installment as the popular vampire-killer. With the ultra-annoying Ryan Reynolds and hot-for-nothing Jessica Biel in tow, "Blade: Trinity" is a joyless and unimaginative movie with lots of broken glass and strobe lights to mask the lack of exciting action. Please pull the plug on this franchise.

But the special effects in the previous two "Blade" movies have always been state-of-the-art. So when a hazy, half-finished looking CGI of a ruined temple in the Syrian Desert showed up in the establishing shot of "Trinity," it was my second clue that this struggle for the souls of the world would be played in an altogether different ballpark. The third strike came in those same opening moments, when WWE wrestler Triple H effortlessly tossed a bunch of big Styrofoam rocks out of the way. If the producers couldn't spend the money on set design, where did it all go?

Hopefully not to Jessica Biel ("The Texas Chainsaw Massacre"), who is on hand to engage in many an almost-electrifying, almost-exciting action scene where the lights flicker on and off and bad "darkcore" Goth techno music plays in the background. As Whistler's daughter, Abigail, she has nothing to do but fight and utter dumbbell lines that connect the dots to the next action scene.

And hopefully that extra cash didn't go to Dominic Purcell, who plays Dracula like a hair-impaired Jim Morrison but with none of the menace or charm.

Instead, let's hope there was a big paycheck somewhere in that $65 million dollar budget for the only person who livens up this undead-on-arrival flick. Parker Posey brings her slimy cockiness to the part of vampire Danica Talos. Not since 2001's "Josie and the Pussycats" has Posey single-handedly upped the energy in an otherwise dull movie with her clever quips and smart-mouth behavior. In fact, she steals all the laughs from Reynolds, who was placed in the wisecracking Han Solo role. It's too bad he wasn't cast in the "first-major-character-to-die" role. 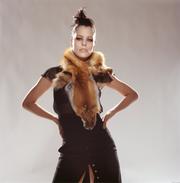 You may ask: Where was Blade in all of this? He wasn't doing much of anything except scowling a lot. Snipes is weighed down with so much leather on his floor-length jacket, vest and pants, that I wonder if this is what kept the perma-frown on his face for the entire movie.

"Blade: Trinity" is the kind of movie where there is more than one montage of the good guys arming for battle with all their inventive little vampire-killing toys. It is the type of film where the evil minions and heroic defenders do battle in anonymous high-rise buildings with lots of flying broken glass and sleek metal walkways. When the main lights go out, the strobe lights come to life, and it's like listening to Gravity Kills in 1996 all over again. Like that bland Nine Inch Nails rip-off band, "Blade: Trinity" has not one original thought in its head.