From country to Celtic

At 18, singer Ashley Davis was getting ready to move to Nashville, Tenn. The Lawrence native was headed to the industry's most prestigious music school, Belmont University, with aspirations of a career in country music. 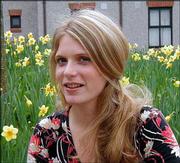 Ashley Davis, a Lawrence native, is releasing her debut CD, "Closer To You."

"A friend of my father's gave me a Connie Dover CD," Davis says of the Kansas City-based Celtic performer. "I put it on a stereo I had saved up my money for all summer. I was standing there and her voice came on, and I was thinking, 'That's it! The way she just made me feel listening to her is the way I want people to feel when they listen to me sing.'"

Out with the country, in with the Celtic.

Davis began honing her guitar and vocal skills to emulate this newfound style of music, all while earning a degree at Belmont in literature of the British Isles and Ireland.

"I constantly had people coming up to me saying, 'Where do you get that Irish influence?'" she says of those who heard her sing. "I had no idea what they were talking about because I didn't grow up listening to that.

"My father's side has some Irish in it. I'm made up of four nationalities, and it was the only one we never talked about. It was strange. It was almost as if a torch had been passed to me to bring that Celtic side back out of our family." 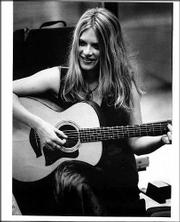 Ashley Davis will release her Celtic-themed CD, "Closer To You," today in Lawrence.

That torch-passing gig became even more prevalent when she accompanied her father, Mike Davis, to Ireland's University of Limerick, where he was helping set up a program with the Kansas University School of Law for the students to do an exchange program. One of the deans there mentioned that the university offered a master's degree in traditional Irish singing, and Davis was encouraged to apply.

"I thought there was no chance I would be accepted, what with being a Yankee," she explains. "You had to do a number of auditions and three interviews, and obviously some writing. They were choosing just two people from around the world to fill these slots. I submitted in March. They called me in June and said, 'You need to move here in August.'"

The schooling has proven valuable because Davis is releasing her Celtic-themed debut CD, "Closer To You," today exclusively in Lawrence.

So how does one go about writing an "original" traditional Irish song?

"It was me studying a lot of Celtic singers and listening to what they do," the 28-year-old says. "Obviously, you have to start off with 90 percent of it being your own voice. But you can certainly shift it certain ways."

Davis says her voice is well-suited to this cultural style of music.

"It's a very pure tone, a soft tone," she says. "It's often described -- and I like this -- as an ethereal tone. It's something I've consciously worked on."

Lord of the Dance

After earning her master's degree in 2002, Davis immediately found one of the few jobs available to someone graduating with a degree in Irish folk music ... courtesy of Michael Flatley.

The fleet-footed "Riverdance" star was fine-tuning his show, "Michael Flatley's Lord of the Dance," for Las Vegas. The production needed a soloist and called up Davis' university director for a recommendation. This led to a year's gig for Davis at the Venetian hotel.

Her most memorable moment came on opening night, which was the first time Flatley ever heard her perform. Flanked by a gaggle of press and a film crew making a documentary about the debut, Davis took the stage and was greeted by distorted backing music.

"This is truly from my training of singing in honky-tonks with random bands -- you just go out and sing no matter what happens," she recalls. "So I went out there and started singing. I saw Flatley's manager run to the sound booth and give the guy the 'cut the music' signal. Then the sound guy gives me the 'keep going' signal and cuts the music. So I switched to a much more traditional style of singing."

Davis pulled an a cappella coup and was greeted by cheers from the whole cast when she came offstage.

"I was kind of hiding in my dressing room and (Flatley's staff) came and dragged me out," she continues. "He just did this whole very Flatley thing (to the press): 'Sorry lads, but this girl stole the show -- and she stole my heart.'

"It was one of the funniest things I've ever seen."

Currently, Davis is living in Manhattan with her mother Jackie, former director of the Lied Center who is now executive director of the New York Public Library for the Performing Arts.

In addition to the financial advantage of being able to crash on her mom's couch while recording "Closer To You," Davis had other reasons for electing to reside in New York.

"I knew the traditional Irish music scene here. It's a small family," she says. "And it's the closest point to Ireland that I could hop over there."

Although Davis has taken a job as a copywriter for a publishing firm, she hopes to return to music full time.

"I am in negotiations with a few different labels at the moment," she says. "Because I did this all independently -- paid for every corner of it myself -- I own everything. So basically I need to see a deal come across the table that I'm happy with to sell the master. Otherwise, I'll put it out on my own."

Davis still gets back to Kansas about twice a year to spend time with her father, who lives in Overland Park. And she always makes it a priority to visit her hometown.

"Lawrence is an exceptionally creative community in general," she says. "I was really lucky to have grown up there. Between going to see the Seem-To-Be Players at the arts center to being dragged to various events at the Lied Center, it really opened my eyes to the diversity that's out there in the arts world. It certainly made me realize that's it's a possibility. It's something I could go for and achieve if I put the right amount of energy into it."