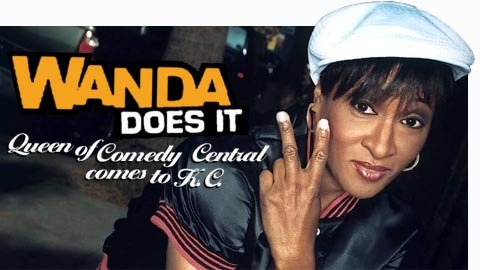 Wanda Sykes has one of those voices that makes you laugh no matter what she's saying. Her segments on Comedy Central's "Crank Yankers," for instance, where she's complaining to a mechanic about the, uh, dookie left in her back seat, or calling a prison to arrange a conjugal visit - with anyone who's up for it - are among the show's most hilarious moments.

Sykes has perfected the lazy, acerbic delivery since her standup debut in 1987 and her subsequent work as writer/performer on the "Chris Rock Show." When that voice and delivery are put with a face, Sykes makes an even greater impression. As Biggie Shorty in "Pootie Tang," as Wanda on "Curb Your Enthusiasm," or as a brilliantly placed commentator on "Inside the NFL," she always provides a show-stealing presence. Her new show, "Wanda Does It," lets her loose in a variety of jobs, from hooker to WNBA coach. As in all her roles, it's Wanda Sykes playing Wanda Sykes playing a character that can frequently be compared to Wanda Sykes. And it's funny.

lawrence.com: Hi, Wanda. How ya doin'?

Doin' fine, thanks. And thanks for talking with me.

So are you the Queen of Comedy Central?

Or is Mo Rocca?

Ooh, that's a close one.

You've got to be the Queen. They're sponsoring your tour, you've got a new show - did they have anything to do with the book?

I guess it's going great, I guess. I have no idea. (laughs)

But people seem to be responding well to it?

Yeah, yeah. No one's thrown it at me.

I'm having a great time doin' it. So now we're just waitin' to see what they're gonna do with it. As far as whether gonna go back and do more, whatever.

Any jobs you've gotten to do that have made you consider a career change?

Of all your projects - "Wanda Does It," "Inside the NFL," your book, your stand-up - which one is your favorite?

I like everything for different reasons, but I'm havin' fun doing the stand-up tour because it's where I started. Doing stand-up, that's my first love, and it's fun. Not edited, no censors, nothin'. Full freedom. It's a lot of fun.

You got into television pretty late, only like seven years ago. Were you doing stand-up already?

How did you get into that?

I was working at NSA, and -

Yeah, National Security Agency. Out of college. I was working there.

Can you talk about that without having to garrotte me afterward?

It was just boring, and I was bored silly doing it. So I heard about a contest ... the Coors Light Super Talent Showcase or something, and comedy was one of the categories. So I sat down at my desk and wrote some jokes, and entered the contest, and, you know, got in there. And I didn't win, but had a great time doing it, and just hooked up in the comedy circuit and just stayed with it.

Is that how you met Chris Rock?

I didn't meet Chris until I moved to New York. Dave Chappelle was in D.C. at that time, so I've known Dave since then.

How's the stand-up business now, compared to then? Is it tougher for a beginning comic now?

I have no idea. I have no idea 'cause I don't - I would guess that it might be easier because there's more places to do it - more comedy clubs and stuff. So I would think now it'd be easier. But who knows? What do I know?

Any advice for a comic just starting out?

Move to a city where like if you don't live in New York move to a city where you can develop. I wouldn't come out to L.A. right away, 'cause there really isn't a lot of places, the comedy clubs, you have people who already made names for themselves gettin' up on stage, so it's kind of hard to start here. I'd go to a city like New York, or - New York. (laughs) Or San Francisco, maybe. And start off there.

What do you think the secret of your success is? Because the last year or two you've just blown up. "Wanda at Large" was hilarious and underappreciated.

But now you've go all this stuff going on, and all this presence.

I just stayed with it, pretty much. I didn't say, "Okay, now I'm gonna start doin' this, or do this type of comedy. I just pretty much stayed with what I've always thought was funny, and just kept working at it. It's always been the same goal since I started, and that's to be a really funny comic, so that's what I always worked towards, and everything else kind of falls into place.

Who do you think is funny?

Who inspired you, or who you like working with. Whoever.

I love Richard Pryor. Richard Pryor, I think, is the greatest. And growin' up, we always watched comedy in the house. Either "Roots" or comedy. And Ed Sullivan had a bunch of comics on, so I remember watchin' Moms Mabley. That's the one that really stuck out, just because, being a female. And Flip Wilson, Carol Burnett, the Richard Pryor variety show.

I don't remember his show.

Yeah, I think they did like six episodes of those.

Your book is pretty up-front about your dislike of Bush. Now that the election is over, and the outcome was wrong, what are your thoughts?

Four more years. I mean, either way, it's not like I was crazy about Kerry either. It's just four more years of the same, basically. Keep blowin' stuff up, we'll see.

What's life on the road like for a comic? Do you have a tour bus, a shitty van, or what?

We fly. We fly from city to city. We do like four shows a week Thursday, Friday, Saturday, Sunday then come back home for a couple days. It's only Keith Robinson, who works with me, who opens. And then my road manager, tour manager, whatever. We're pretty low-key. We fly in, we like to stay at a nice hotel, do the show, then have a nice meal, that's pretty much it. If we have time we'll try to take in a movie or somethin', but after the show we pretty much just eat and drink.

On your blog you usually mention where you ate. You seem to really enjoy food.

I enjoy a nice meal and a nice bottle of wine. Or bottles of wine.

Where are you living these days?

You don't sound too enthused.

Is it where all your projects are based?

Like "Wanda Does It?" Yeah, it's based outta here too. And I work with Lance Crouther, he's here too.

Biggie Shorty will always hold a special place in my heart.

I'm gonna sign your pity on the runny kine.

So did you hang out with your family for Thanksgiving?

I pop that bitch in the oven. Old-fashioned. I'm not frying it and all that stuff. Although fried turkey is delicious.

Any other holiday favorites?

Does he lord it over everyone?

No, he's very confident, so he doesn't have to be over the top. He's very subtle.

Do you ever have to tell him to shut up?

I've told him that he's annoying, that he knows everything and I find it very annoying.