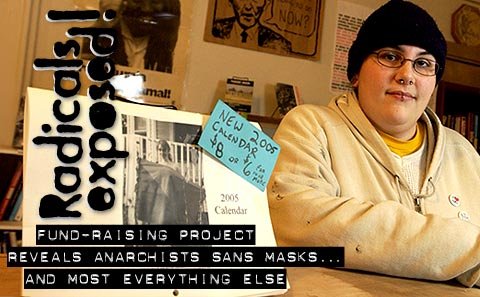 It started out as an offhand jab at recent calendars featuring Kansas University students in various stages of undress.

Now it's a naked look at Lawrence anarchists.

"We were all broke, but we needed money," said Vanessa Hays, a member of Lawrence's anarchist community, pictured above.

"Somebody -- as a joke -- said we should do a naked calendar like the one at KU," she said. "It wasn't taken seriously at first, but the more we thought about it, the more we liked the idea."

The group's first calendar, featuring nude photographs of Lawrence-area radicals, men and women, came out last year. The 2005 edition came out a couple of weeks ago.

Hays, a 23-year-old senior at KU, is in two of the calendar's 19 black and white photographs.

"It's all in good humor," Hays said. "But it's serious in that it's art, and it's not pornographic or sexually exploitative. We're serious about raising money for things we believe in, but still, it's meant to be light-hearted."

Calendars sell for $8 and are available by calling 865-1374 between 3 p.m. and 6 p.m. Monday through Friday and from noon to 6 p.m. Saturday and Sunday. Calendars also are for sale at Wildman Vintage, 936 Mass.

The $1,500 raised by 2004 calendar sales was used to support the group's Solidarity! Revolutionary Center and Radical Library, 1119 Mass., and to buy typewriters for inmates in federal prisons.

Hays said the anarchists had no trouble finding people willing to pose.

"The biggest problem," she said, "was getting schedules to mesh."

Images in the 2005 calendar include a dumpster-diving "Cajungrrl," a nude pair playing a board game; a young man holding on to a strategically placed cowboy hat on the boardwalk at the Baker Wetlands, and a woman named Kat doing a chin-up.

Two of the photographs include Claven Snow, a Lawrence transsexual. 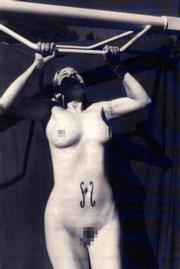 Miss December in Lawrence anarchists' 2005 calendar. Note: the calendar itself does not pixelate 'private' parts.

"This is a celebration of different people's bodies," Hays said. "There's nothing inherently dirty or bad about your body. And being naked is not necessarily sexual." 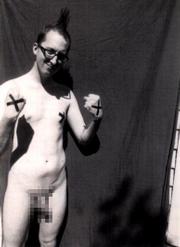 Mr. February in Lawrence anarchists' 2005 calendar. Note: the calendar itself does not pixelate 'private' parts.

"Being naked is not necessarily being sexual."
"...It's not pornographic..."

Is there a problem with naked pictures being sexual? Leave it to the "radicals" to demonize something as basic as Wouldn't it be better just to eliminate sexual urges all together? You guys are just as nutty as those Xtians who try to close down adult bookstores because they want to "clean up" their town... you just have a more subliminal way of expressing it. Viva la SEXUAL REPRESSION!