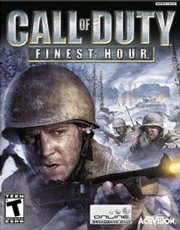 Call of Duty stormed on to the PC shooter scene with tremendous success with its tight, intuitive and fun gameplay, soaring to the top of the online popularity charts. Activision decided to bring the series to the consoles with a fresh experience, not a simple port. How does the console version compare?

Even if you aren't into video games, one quick run by the Target video game windows will tell you that there are too many war shooters on the market. How could this be any different? Where EA's Medal of Honor: Rising Sun failed miserably, Call of Duty: Finest Hour sees success.

In Finest Hour, you get to play as several different soldiers. You get to view war through Brits raiding in North Africa, Russians fighting in Stalingrad and U.S. soldiers charging through Belgium. Each soldier has a different weapon set available to him to change up the gameplay a little bit.

If there is one thing that is immediately noticeable about the gameplay is that the game wants you to experience the intense moments, not to get attached to the characters. There is no time to do so. So in order for the game to really grip you, it would have to bring something innovative to the table. Unfortunately, it doesn't.

Every turn, every scripted event and every moment is funneled through unavoidable linearity, combined with very elementary gameplay. Each of the dozen weapons are your standard issue sniper rifle to rocket launcher that react in the same way as so many others before it. But, for the consoles, it's one of the WWII shooters that do it better than most. If anything, Finest Hour's single payer experience is solid, if very basic. There are some really shoddy spots where your enemies don't even notice your allies when they are standing right next to them, ready to kill. This takes the believability right out of the experience. This is balanced with the fun, although less cerebral levels where you pilot a tank. The vehicle gameplay elements are very welcome, but still don't have the tightness and accuracy that we're used to in other console shooters.

The multiplayer modes also offer a capture the flag, Deathmatch, team Deathmatch and a dual assault type mode called Search & Destroy. The online experiences in the Xbox and PS2 version were virtually lag free. It wasn't the most fun I've had online. Lots of the animations take a dive and the weapon sets aren't as rewarding as a Halo 2 or even Up Your Arsenal.

If one word could describe the look of all WWII console shooters it would be "grey." Finest Hour is slightly on the better side of this, sporting some cleaner and more vivid environments, especially in Africa, but the overall look is fairly muddy. Many of the animations also don't look to good, especially some puny explosion sequences:which there are a lot of. The sound is done very well, recreating a moody WWII ambience for the most part.

At the end of the day, the fresh take on the series ends up just feeling like a slightly inferior port from PC, something console owners are all too familiar with. I think this problem will be remedied with the next generation machines being so similar to the prowess of modern PCs. Regardless, Finest Hour is much better than the latest EA WWII take, and if you don't own a PC and are dying for another look into that time period, it may suffice.