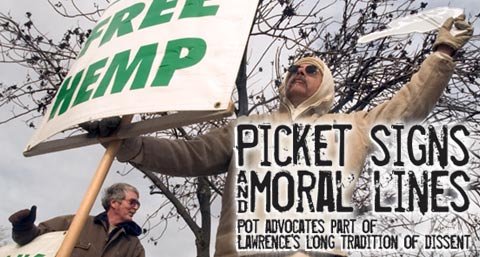 Here's what one corner of downtown Lawrence sounded like last Sunday afternoon:

As drivers leaned on their car horns, Mark Creamer and Thomas Trower stood at the intersection of 11th and Massachusetts streets, "Honk for Hemp" signs in hand, a little Christmas tree apparently made of pot leaves propped up on the trash bin behind them.

"I do think it's safe to say this is the only place in the state we could do this and get away with it," Trower said, as he raised his giant cutout thumbs-up in acknowledgment of a passing honker.

Love 'em or hate 'em -- and the occasional driver hurled a thumbs-down or negative remark at the pair -- Creamer and Trower are one example of a long Lawrence tradition: protest and dissent.

The Lawrence Coalition for Peace and Justice demonstrates against the Iraq War every Saturday at the Douglas County Courthouse. Traffic jams caused by anarchists marching down Massachusetts Street are hardly unusual.

In the 1980s, Lawrence activists protested against nuclear proliferation. In the '60s and '70s, they protested for civil rights and against the Vietnam War -- a turbulent time in city history that included the burning of the Kansas Union.

And of course, the town was settled in the 1850s by "free state" activists who didn't want slavery brought to the Kansas territory.

"I've always said Lawrence has politics in its roots in ways that very few American communities did," said Steve Jansen, former director of the Watkins Community Museum of History.

Creamer, 57, wears 1970s-style aviator sunglasses and a trimmed mustache that gives him a resemblance to the actor Dennis Weaver. Creamer said he started smoking pot in 1967 after he came to Lawrence to attend KU.

"I chose marijuana as an alternative to alcohol," he said last week.

It was more than 20 years before he became an activist -- but Creamer did so with a splash in September 1989.

"My big event was smoking a joint in public and getting arrested, going to jail," he said.

That public place was the Lawrence Police Department. Creamer tried arguing that because the act was done to publicly defy drug laws, it was free speech and immune from prosecution. Prosecutors disagreed.

"The district attorney in my trial said standing on the corner was a protest, but smoking was a criminal act," Creamer said. "We took the cue."

First, though, Creamer and Trower had to plot out their plan of protest. They were stymied by a lack of allies.

The two started their efforts in 1990. Once or twice a weekend, they occupy a downtown corner, hold up their signs and pass "hemp dollars" to passing pedestrians.

"We call it our symbolic futile gesture," Creamer said, adding: "We get a lot of positives. We try to wave at everyone. We get an occasional negative, but mostly positives. And we consider a smile as good as a honk."

Allan Hanson, coordinator of the Lawrence Coalition for Peace and Justice, said Lawrence is a great place for protests.

"This was a liberal hotbed in Kansas, founded by New Englanders as an antislave state," he said. "We do consider ourselves to be a perpetuation of that tradition."

The coalition hosts discussions and lectures to further its work.

"We don't only protest and march," Hanson said. "We talk and discuss and try to be thoughtful, get people to improve their understanding of situations."

But, he acknowledged, the protests are an important part of the coalition's mission.

"I guess we feel we've got to make a statement," Hanson said. "We are not pleased with the way policy in this country is going. We want to express our opinion and let people see that we're expressing our dissent."

Which doesn't sound so different from the "honk for hemp" guys.

"We figure that somebody ought to do it," Creamer said.

Creamer says he no longer smokes pot -- he can't stand smoke of any kind anymore. Trower pleads the Fifth Amendment when asked the question.

Both men say they're getting weary of the routine. They figure they passed 1,000 demonstrations sometime in the year 2000.

Creamer isn't sure if the demonstrations have made a difference. Marijuana laws have become more liberal in other states, but not Kansas.

But he figures there's still value in the time he's spent protesting.

"I guess," Creamer said, "at least I stood up for something I believed in."

I honk this dude out every time. Everyone needs to lighten up and let the old hippie have his fun!