It's just days before Christmas and Santa has been spotted near Centennial Park.

Horns honk and children gawk at the jolly man in the plush red suit as he waves to passing cars. With his thick, smoke-stained beard and bulbous tummy, this street-side Santa looks like an archetypal St. Nick, built tough to withstand hordes of lap-sitting cherubs.

On this mild Thursday afternoon, Santa had planned on going downtown to pass out candy canes and business cards. But now he is tired, in part to a hereditary heart condition, which also prevents him from holding a steady job. As he saunters back into his duplex, he passes his sleigh: a beat-up gray pickup truck stickered with slogans like "It's the duty of every patriot to protect his country from his government."

Inside the duplex, Santa's bachelor pad is adorned with Frank Zappa and Grateful Dead posters. A Cheech and Chong record -- miraculously, with rolling paper still intact -- adorns Santa's coffee table. Four Christmas stockings hang from a bookshelf, three of which bear the names of Santa's cats: Elvis, Mojo and S*head. The other one simply reads "Harley-Davidson."

Santa strips off his coat, revealing a bulging pair of denim overalls and thick arms covered in tattoos (his back -- still hidden under a K.C. Chiefs T-shirt -- is plastered with pin-up-girl tats). On his lower left arm, a rainbow-colored tattoo: the Chinese character for hemp.

"If you look at this picture and you know anything about smoking accessories, you know what Santa has in his left hand is a turn-of-the-century opium pipe," he says. "That's part of why he's so jovial, because he's got a buzz." 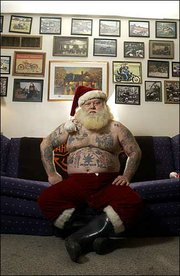 Lawrence resident Chris Hartman portrays Santa Claus around town as a way to experience the "Christmas magic." Hartman, not your everyday Santa, displays his tattoos in his home.

To his closest friends and family, Santa is Chris Hartman -- a self-described "happy hippy biker" with boundless generosity. He's the kind of guy who would gladly get out of bed at 2 a.m. to deliver gas to stranded friends; who would surprise buddies by showing up at their bands' out-of-town gigs; or who would gladly offer strangers his last $20 and floor for the night.

But to thousands of potheads and hemp advocates across the country, Santa is Simon Worman, author of "The Original Unofficial Joint Smoking Rules." Dubbed the "Emily Post of Pot" by High Times magazine, Hartman has sold more than 5,000 copies of his self-published book through mail-order and independent retail (mostly head shops).

The book's 75 rules of ganja-torching etiquette (example: "If you're in the middle and you have to keep passing the joint back and forth, you are allowed to double toke the joint.") have become sort of an underground Bible for blunt blazers.

"I decided if Tommy Chong can make a living laughing at weed, why can't I?" Hartman says. "It gave me a direction ... My goal now is to become a writer."

When talking about his book, Hartman's raspy, smoke-weary voice nearly buckles from overexertion. In between coughs and phlegm-clearing hacks, his chubby face lights up with excitement as he explains which corporations and political figures are to blame for keeping marijuana illegal. He cites passages from Jack Herer's "The Emperor Wears No Clothes" -- a book dedicated to exposing government-perpetuated marijuana myths -- with the ease of a university scholar.

"The more I learned, the angrier I got," Hartman says. "The truth is it's a natural plant. Doctors are finally coming out saying it is good medicine." 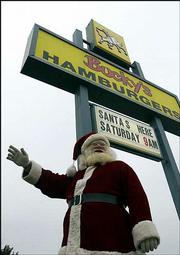 Lawrence resident Chris Hartman waves at passers-by in front of Bucky's Drive In.

Hartman is quick to add that he doesn't endorse marijuana use for everyone. His main hang-up, he says, is that the drug is "no more harmful than aspirin" and actually much safer than alcohol.

"We have thousands of people a year die from alcohol and tobacco-related deaths and they're totally legal," he says. "When you're a kid, your mom tells you not to lie, because the truth always comes out. And I think that it should and eventually will be legalized when people realize the truth."

The first time Chris Hartman felt the magic of Santa Claus, he was doing 70 mph down a Florida interstate. Dressed in full Santa gear (including a red velvet Santa cap fashioned from a helmet), Hartman and his elf buddy were joy riding down the highway on their Harley motorcycles.

"This car went by us with like four or five kids in a station wagon and it was like a slow-motion thing where the magic in each kid's face was almost eerie," Hartman says. "It was like a spiritual awakening."

"I went to the funeral, and when we got home there were Christmas presents under the tree from Mom," says Hartman, who lost touch with his father after his parents divorced when he was 5. "The next few years, whenever Christmas would roll around, I'd get really sad."

So Hartman began playing Santa Claus as a way to bring happiness back to Christmas. He led a motorcycle motorcade in a 'Toys for Tots' fund-raiser organized by a Florida biker's association that he belonged to. He also began visiting the homes of friends at Christmas, surprising their children with personal visits.

In 1991, Hartman moved to Lawrence and brought his Santa suit with him. A few years later, while visiting an elderly blind woman at a local nursing home, Hartman felt the "Christmas magic" a second time.

"As soon as I walked in I'm like, 'Ho, ho, ho, Santa's here' and she's like, 'Oh, you're not Santa; you're Jim from the kitchen,'" he recalls. "I went over and I took her hand and I made her touch my beard and I said, 'Is that really what you think?' And the second she touched my beard, her eyes got as big as silver dollars and that presence was there again -- she truly believed at that moment that I was Santa Claus.

"And at that moment, I truly believed I was Santa Claus."

On a Friday afternoon in December, Hartman is visiting a preschool that has hired him for a personal Santa appearance. In the school's playroom, he calmly fields questions from 12 starry-eyed moppets.

"Magic," Santa responds. "And if I give away the secret, the magic doesn't work."

For the moment, this seems to satisfy the overzealous tot. But Santa's work is hardly done; he still has to explain why he can't give reindeer as gifts.

When Santa leaves, the screaming children tear open their gifts in an exuberant flurry. Their beaming faces and joyful outbursts indicate that Santa has done his duty.

The teacher who hired Hartman is enamored with Santa's performance. But when asked about Hartman's book, he begins to feel uncomfortable. He expresses concern that being associated with Hartman in the media could get him in trouble with his boss or the kids' parents.

So proud, in fact, that when he printed business cards for personal Santa appearances a couple of years ago he didn't think twice about putting his e-mail address -- jointman@aol.com -- on the card. He got two gigs for $50 apiece, one of which skipped out on the bill.

The people who call on Hartman's services, however, do so for one simple reason: he plays a good Santa.

"I always wondered why Chris didn't really exploit the Santa thing, 'cause he could be the best Santa out there," says Joe Comparato, whose 4-year-old daughter, Mia, has been visited by Hartman at Christmas. "He has more fun than the children do; I really believe that."

This year, Hartman had gigs lined up at Bucky's Drive In and the Willamstown volunteer fire department. He'll have Christmas dinner with a friend's grandchildren and probably go to bed early on account of the narcolepsy-inducing drugs he takes to sooth his heart condition (pills, not pot).

Hartman also made his annual appearance at The Flamingo Club, a north Lawrence nudie joint where he frequently grabs lunch ("Best home-cooked food in town," he claims).

If he's lucky, he might get a reprise of a second type of Christmas "magic" he discovered years ago during an impromptu visit to a Florida strip club: free lap dances.

"The main reason I do it is for the children," he says. "And then, after the kids go to bed, there's bigger girls who want to be on the naughty list."