It appears Kwanzaa has finally made it onto the mainstream map. Virgin Mobile's holiday television ad campaign this year features a subdued mob of carolers singing an amusing new song wishing viewers a Happy Christma-hanu-kwanzaa-kah.

Nothing like a catchy jingle on a national ad to catapult a relatively new holiday -- and a nonreligious one at that -- into the national spotlight at a time when Christmas and Hanukkah tend to steal the show.

For the uninitiated -- and there must be many of you -- Kwanzaa is a cultural holiday meant to unite people of African descent around the world. During the seven-day affair, which runs today through Saturday, people gather with loved ones to reaffirm bonds of family and culture, as well as to share food and exchange gifts.

Maulana Karenga, chair of the department of black studies at California State University and civil rights activist, introduced Kwanzaa in 1966, a time when blacks were struggling for equal rights. He wanted it to coincide with the Judeo-Christian holiday season, already a time of celebration, and he chose a Swahili name that means "first fruits" in honor of early African harvest celebrations.

Here are a few facts, from howstuffworks.com, about the holiday:

Seven is an important theme of Kwanzaa. The holiday lasts seven days -- one day for each of its seven guiding principles. There are seven basic symbols used in the Kwanzaa ceremony -- one of which consists of seven candles -- and each symbol ties into one or more of the seven principles.

¢ Umoja (oo-MOE-jah): Unity (joining together as a family, community and race)

¢ Ujima (oo-JEE-mah): Collective Work and Responsibility (Building the community together and solving any problems as a group

¢ Ujamaa (oo-JAH-mah): Cooperative Economics (The community building and profiting from its own businesses) 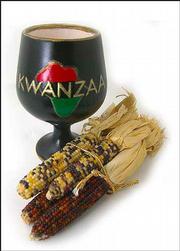 Symbols used by people celebrating the African-American holiday of Kwanzaa can include Muhindi (ears of corn), which represent children, either your own or the village's, and Kikombe cha umoja (unity cup), which is used to pour tambiko, or libation.

¢ Nia (nee-AH): Purpose (The goal of working together to build community and further the African culture)

¢ Mkeka (M-kay-cah): A mat (usually made of straw, but it can also be made of fabric or paper) upon which all the other Kwanzaa symbols are placed. The mat represents the foundation of African traditions and history.

¢ Mazao (Maah-zow): Crops, fruits and vegetables that represent traditional African harvest celebrations and show respect for the people who labored to grow them.

¢ Kinara (Kee-nah-rah): The candle holder represents the original stalk from which all African ancestors came. It holds the seven candles.

¢ Mishumaa (Mee-shoo-maah): Seven candles, each of which represents one of the seven principles. The candles are red, green, and black -- symbolic of the African people and their struggles.

¢ Muhindi (Moo-heen-dee): The corn represents African children and the promise of their future. One ear of corn is set out for each child in the family. In a family without children, one ear is set out symbolically to represent the children of the community.

¢ Kikombe cha Umoja (Kee-com-bay chah-oo-moe-jah): The Unity Cup symbolizes the first principle of Kwanzaa -- the unity of family and of the African people. The cup is used to pour the libation (water, juice or wine) for family and friends.

¢ Zawadi (Sah-wah-dee): The gifts represent the labors of the parents and the rewards of their children. Gifts are given to educate and enrich the children; they may include a book, a piece of art or an educational toy. At least one of the gifts is a symbol of African heritage.

Millions of Africans -- in America and around the world -- celebrate Kwanzaa each year. They come together with family and friends to honor African ancestors and traditions and look forward to their future as a people. They gather in homes, schools, churches and community centers.

Black, red and green have always had significance to Africans (they are the colors of the African flag), but they were introduced to African-Americans by Marcus Garvey, a black nationalist leader in the early 20th century. The color black stands for the African people; red represents their struggle (blood); and green is a symbol of their future. Most Kwanzaa decorations are made in the holiday's symbolic colors.

Decorative items people use to make their homes feel festive during Kwanzaa include baskets, African art, posters, the African flag and harvest symbols. The most prominent feature in the house is a table spread with the mat upon which the other symbols of Kwanzaa are displayed.

Observers hold a great feast, or Kwanzaa Karamu, on Dec. 31. It typically includes an introduction and welcome, followed by music, dance, poetry and readings. Other elements might include cultural reflections, a speech by a guest lecturer, a reading of the libation statement and a reading of the farewell statement.

The food served is a blend of Caribbean, African and South American flavors. Some popular dishes are fried okra, plantains, fried chicken, black bean soup, baked ham and gumbo. A large mat is placed in the center of the room, and all of the food is prominently displayed on it.