How to avoid ruining your eve with misspoken words of praise

It's New Year's Eve, you've clinked your spoon against your champagne flute, the room is growing silent and it's just about time to launch into your toast.

What are you going to say?

Whatever it is, it better be good, because this is the beginning of a new year for everyone at the party.

Although toast making isn't governed by any set-in-stone rules, there are some guidelines floating around to point you in the right direction.

First and foremost, avoid getting drunk and hashing out your personal problems in public. Remember the horribly uncomfortable toast given by an inebriated Mitch (Luke Wilson) at his friend's wedding in the 2003 movie "Old School?"

It went something like this: "True love is hard to find, sometimes you think you have true love and then you catch the early flight home from San Diego and a couple of nude people jump out of your bathroom blindfolded like a (expletive) magic show ready to double-team your girlfriend ... "

Here's to a joyous New Year's Eve Toast, like that of merry makers, from left, Jason Simon, Meika Potter, Gabriel Krieshok and their friends. Read on for advice on the perfect words for your holiday revelry.

Fortunately, Bernard (Vince Vaughn) interjects with something about love being blind and saves the day - sort of. But you won't always have an astute friend to help you out in a bind.

So sip judiciously, and consider these bits of advice:

A toast should be short and to the point. Nobody wants to stand through a year-in-review monologue. If you notice people getting antsy during your speech, you've probably gone overboard. And avoid using grandiloquent words (like grandiloquent). Simple words often sound the most sincere. In all cases, be yourself. People will appreciate a heartfelt offering.

Make sure you deliver a toast that's appropriate to both the audience and the occasion. For family gatherings, that might mean focusing on warm words that celebrate your togetherness. For large groups of friends, something wittier might be in order. And a romantic or promissory tone might be best when the party is just for two.

ALWAYS cut out the vulgarity. Is it really so hard to keep it clean for a few minutes while you deliver what's intended to be a classy gesture? It's best to avoid crude language, sexual innuendoes or dirty jokes altogether. Some etiquette experts suggest that if you're at a party where an unfortunate toast is delivered, you should give an eloquent one afterward (a la Vince Vaughn) to bring people back to a positive place. 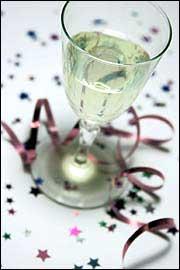 GOOD ORATORS should rehearse their toast out loud and in front of a mirror before sharing it with friends.

Good orators will tell you that - however ironic - it takes practice to sound spontaneous. Try rehearsing your toast as you would any public speech: out loud and in front of a mirror or some friends. It's not a bad idea to have a couple of short toasts memorized in case you're nominated to give a spur-of-the-moment toast. There are plenty of ready-made and time-honored toasts that can be found by doing a quick Internet search (see list at right).

Stand tall - most of the time

When delivering a toast, it's always best to stand. If anything, standing will get people's attention and help quiet them down. Despite popular practice, experts recommend NOT rapping on a glass to signal for quiet. You could end up with nothing to toast with.

The standing rule does not apply if you're the person receiving the toast, at least until the toast is complete. Nor should you raise your glass or drink to yourself. However, it is customary to stand and respond afterward, even if that just means saying thanks.

Define the end of your toast by saying "cheers," asking the audience to "raise your glass" or some other definitive gesture.

A few other details