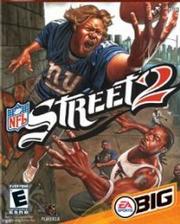 NFL Street 2's older brother arrived not even a year ago. We're already into another (off) season on the street laced with NFL backyard-ery. Released the day after Christmas when wide-eyed kids armed with lucrative gift cards hit the mall, is NFL Street 2 as smart as its release date?

Like NBA Street, the NFL version caters to the pick-up-an-play arcade side of football games. Add some layers of unexpected depth and you'll seemingly have a solid title. NFL Street lacked any depth of the sort, paling in the light of better arcade fests like NFL Blitz, despite an eye-catching art style. With many unlockable legends of the NFL in tow, Street 2 beefs up the options this time around and proves to be a more rewarding experience, mostly with friends.

Controlling your limited array of passing and running plays still controls like a charm. Certain moves, jukes, fakes, and stiff arms are performed with either a tap or a hold of a button, maximizing the usefulness of each. After a short training, the moves become arguably more intuitive than Madden.

This year, the major addition is learning to jump off walls, using them to find better angles to both throw and receive. That's right. Can't see you receiver past the clutter up the middle? Just run up the wall to enhance your view and throw accordingly. Look like the defense is running you into the wall? Simply juke of it to gain a jumping height advantage.

Not only that, but in true EA Big style, your combination of moves are tracked and awarded according to how stylish they were. One-hand grabs, no-lookers:there is a variety of extra sass you can put into it. Using the wall to make it all look better is advisable, especially since advancing and earning points to upgrade your characters in the main single player modes relies so heavily upon them.

Gamebreakers have been reworked to have two distinct levels. The first level will pull off an otherwise impossible move while building up to a level 2 Gamebreaker will sport a drawn out cinema that will always lead to your advantage. This option has always been fun to look at and in Street 2 provides a decent climax to furious action.

The new Own the City mode has you creating your player from scratch, attempting to put him through the paces to become a legend. Then, if you choose, you can import your character into next year's only NFL game, Madden 2006.

Once you grow out of the single player mode, there are many multiplayer modes that prove to be worthwhile. Even online, where EA is notorious for chucky servers, the play is smooth. Quick Strike, 4 on 4, 2 Minute Challenge and Jump Ball Battle are all there to choose, but don't prove to be as fun as the simple Crush the Carrier or Open Field Showdown. In Crush, the one with the ball is essentially "it," gaining points by having the ball and getting more by being stylish. Once your turbo runs out, you'll most likely get tackled and cough it up. This is not only a boatload of fun, but actually hones your necessary twitch reflexes for the regular game. Open Field Showdown is a one on one mode where you try to get passed the one defender. It's simple, yes, but can prove to be quite a thrill if you have two seasoned players.

The audio and visual presentation is great. Although there isn't much incentive to customize the details of your character since the viewing angle is so far away, the artistic, exaggerated style really fits the experience well. The animations are smooth and superbly implemented with audio cues as to which move is being performed. This adds a different level of how you react, since you won't necessarily have to rely on seeing the action more than you will hearing it in some instances.

Overall, the wall-jumping innovation doesn't really take Street 2 to greatness, but the multiplayer does give the game much more luster than the original. No one can deny Street 2's visual appeal. And the new enhancements, although they may seem few, make the predecessor look much more dated than it actually is.