The year 2004 will likely go down as a year nobody can remember much about. After all, it's overshadowed by 2001 and marred by events we'll do our best to forget -- a regrettable war, a confounding election, the rise of the machines, the complete disappearance of Ricky Martin, etc. However, in the interest of preserving a piece of our collective memory for posterity -- that is to say, journalism, or at least some semblance thereof -- we've cobbled together a few items from the past year's headlines. May you enjoy...

(1/20) Following the 1999 passing of widely renowned jazz archivist and KU professor Richard F. Wright, the KU's jazz collection lost its caretaker and champion and fell into the hands of, well, nobody. Despite the efforts of a few volunteers, the archive lacks the minimal funding it needs to continue and its future remains uncertain. Read story 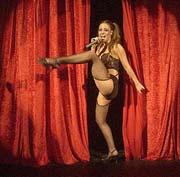 (1/20) "Brad Majors is always an asshole. Janet Weiss is always a slut." Thus began our story about last year's local production of the Rocky Horror picture show. While the piece was intended to be a faithful representation of the spirit of this counter-cultural show, some of our readers didn't appreciate the candor. In fact, we lost an advertiser over the story. We're pretty sure no other of our stories can claim this distinction, so we figured we should include it here, though it may risk adding salt to the proverbial wound. Read story

(3/2) Mac Lethal is easily Lawrence's most outspoken rapper, and he's definitely among the most talented. On the occasion of his latest release, we talked with Mac about 'emo rap', bad show promoters and the ignorant MCs who threaten an American art form. Read story, download mp3s, watch "All Night Long" video

(1/14) Whether you're in NYC or LA, if you're into inline skating you know about Alex Broskow. He's one of the nation's baddest-ass skaters and he does most of his ripping and shredding here in Lawrence on Wescoe Beach and on your church's hand railings. Read story and watch videos of Broskow's talent

The Passion of Dale

(3/4) There's not much we can say here in the way of embellishing on 'Randy,' the fruit of a blogger who came to us last year with his home-movie-style Question Time genius. This is easily the 'highlight' of a string of soul-barings brought to you by Randy in 2004. Watch 'The Passion'

Taking the "nurse" out of nursery: Why I think the folks at LAC are a bunch of boobs

(5/11) It's rare that a news story grips a community, tapping into a raw nerve shared by so many. It's perhaps even rarer that a blog should do so. While, granted, breasts are always a hot topic around the water cooler, we think the popularity of this story reflects the potential of blogs to be, as in this case, solid community-access-style journalism. This blog and the ensuing discussion resulted in debate over the ordinance in question at a city commission meeting. Read blog and reader comments 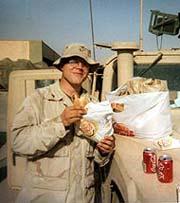 The rest of the story

(5/18) While Bush was declaring 'victory' in the war in Iraq, we talked with Lawrence soldiers past and present about their experiences in the military and in civilian life thereafter. What we heard were essentially two very different takes: that the military enriched the soldiers' lives in ways that couldn't have happened otherwise, and that that the military ended any chance of the soldiers being able to relate to others and lead a 'normal' life. Read story

(8/24) Lawrence's best sketch comedy production was resurrected in 2004 with two hilarious shows. Though this story pales in comparison to Victor himself, we're pretty proud of our funny photo illustration at the top of the story. Go ahead! Try clicking and dragging the 'Shock and awesome' bar and see what happens! Hilarious!! Read story, listen to an audio interview with Victor, and watch video of the show

(10/5) This story reflects all that is wrong with American music. While radio listeners everywhere suffer heavy rotations of Britney and other lip-sync'ers, masters like Billy Q. Effinger quietly go about their genius with zero acknowledgement from the industry machine. We simply cannot abide that. We salute Willie the Warlock. Read story and download mp3s

(10/5) While you may find it baffling that there are video games designed to replicate actual life -- or more baffling still: that millions of people spend hours of their actual lives playing these games -- our ace gamers humbly submit that you need to be a little more creative. Use your virtual Sim world to trick and seduce, to confuse or to torture, to kill and maim...build not a mundane world resembling your actual existence, but instead construct a tower of doom. Read review

(10/12) This headline is hilarious. We can't comment on the story...we just skimmed it. Read story 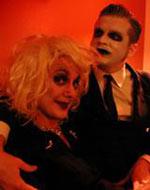 (10/25) In 1962, Herk Harvey unveiled his first and only feature film, "Carnival of Souls," a creepy drive-in classic that was filmed almost entirely in Lawrence, KS. In 2004, two uber-fans of the film shared their obsession with you. Read story and watch video clips from the film

(12/) This story marked the only time somebody we interviewed came to our office and begged us not to run a story. Understandably so...Stull, Kansas, only gets attention around Halloween and residents' experience has been that the press attention only perpetuates a lie and all the juvenile hooliganery that goes with it. Though we were sympathetic to their plea, we believe change is only effected through open public discourse, not via suppression. We sincerely hope this story helps reach the same end that those Stull residents hoped to reach via said suppression. Read story and listen to audio interviews with Stull residents

Joe Posnanski must be stopped!

(11/5) We're just a wee publication trying to find our way in a world of huge corporate papers who steal all our advertiser's dollars. So when one of those huge corporate papers messes with one of our bloggers, we cower in the corner, powerless to do anything about it while our blogger goes after the villain, mouth for scabbard. Read initial blog | Second attempt at justice | Evil smote, justice served

(12/13) Though a writer might be blessed with all the reporting savvy of Paul Harvey and all the story-telling genius of Garrison Keillor, there's no substitute for sheer serendipity when it comes to stumbling upon a story like that of Chris Hartman, a.k.a. Simon Worman, a.k.a. Cannabis Claus. Hartman is a part-time Santa who rediscovered the joy of Christmas via his seasonal hobby a few years after his mom passed away on Dec. 23, 1986. He is also a tattooed humorist who wrote "The Original Unofficial Joint Smoking Rules." In short, he's one of those rare individuals who make Lawrence the singular community it is. Read story, listen to an audio interview with Santa, and watch a video excerpt from the "Joint Smoking Rules" DVD.

We're quite sure we left out some very choice stories from the past year. If you remember one that we've forsaken, email us or post the link below.