He likely wore even less than that -- at most a loin cloth or Speedo, perhaps.

"He had more kinks than a roll of barbed wire," says Rick Musser, a Kansas University journalism professor who wrote his master's thesis on Kinsey.

Gardening depictions aside, Musser says the new movie "Kinsey" -- which opens today in Lawrence -- is a restrained and mostly accurate portrayal of the sex researcher whose books shocked and titillated the nation during the 1940s and '50s.

"It was a generous portrayal of (Kinsey) as a hero," Musser said this week.

He did his study of Kinsey during the early 1970s at Indiana University, where the scientist had founded the Institute for Sex Research more than two decades earlier. Kinsey and his associates conducted face-to-face interviews with more than 18,000 people about their sexual histories.

Kinsey's conclusions -- that a third of men had a "homosexual experience," that half had extramarital affairs and that two-thirds had been with prostitutes -- attracted a lot of attention. Musser found more than 430 articles about Kinsey in the institute's archives. 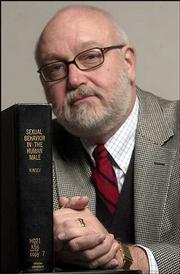 Rick Musser, KU journalism professor, did his master's thesis on sex researcher Alfred Kinsey, the subject of a film opening today in Lawrence.

"I was looking to see how accurately the press had covered his research, because Kinsey was more than a bit of a control freak," Musser says. "He actually required reporters to submit their copy for him to review. So it came as no real surprise that the stories that reported on the research were pretty accurate.

"Kinsey was really a pop-culture phenomenon, and a lot of the stories had very little to do with the research and more to do with sex and Kinsey as kind of a 'nudge, nudge,' kind of sexual innuendo," Musser says.

What was surprising is that news of Kinsey's own extramarital affairs with men -- and other unorthodox sexual activities -- went unreported until documented in a pair of late 1990s biographies.

Kinsey is credited with sparking a new American openness about sexuality. But he remains a controversial figure -- especially for conservatives who accuse Kinsey of perversion and say he contributed to a deterioration of the country's morals.

"He told us things about ourselves we didn't want to hear," Musser says, "and in some cases there are people who challenge his research, how accurate it is, even unto this day."