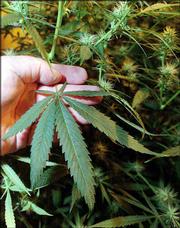 Douglas County smoked the rest of the state when it came to the number of indoor marijuana plants seized by law-enforcement agencies the past two years, according to new data compiled by the Kansas Bureau of Investigation.

There were 603 marijuana plants seized from indoor growing operations in Douglas County during 2002 and 2003, according to the bureau. The county that came closest to that haul was Trego County, with 385 plants seized.

The KBI's agent in charge of marijuana eradication said he thought the numbers showed that times haven't changed much since 1970, when a CBS "60 Minutes" episode highlighted the marijuana subculture in Lawrence and Douglas County.

"Here it is 30 years later, and we've got the same damn problem in the same county," agent Jeff Brandau said.

And he said the problem was bigger than it appeared, that the agency's numbers barely scratched the surface. At most, he estimates, they represent 5 percent or 10 percent of the indoor marijuana growing in the attics, barns, basements and hidden rooms of Douglas County.

One fact that has changed since 1970 is that more and more marijuana is growing indoors instead of in the wild -- partly in response to increased surveillance from the air.

"You can avoid detection. You get multiple seasons. You don't worry about the elements at all," said Dan Dunbar, a drug prosecutor in Dist. Atty. Christine Kenney's office. "You don't need that much space to really put together a nice little crop."

An indoor marijuana-growing operation that was seized during a bust in Douglas County. The lamps, fertilizers, irrigation tubes and other accessories used in indoor growing are readily available for purchase on the Internet.

The equipment needed to set up an indoor operation -- lamps, fertilizers, irrigation tubes and the like -- can be found and purchased on the Internet. Pot-minded botanists supply growers with tips via magazines, books and the Web.

In a recent Douglas County case -- Brandau wouldn't identify it specifically -- a man was growing 50 plants indoors. Every six weeks, they yielded 2.5 pounds of high-grade marijuana, which he sold for $1,200 per quarter-pound, Brandau said.

"We're always coming up with stuff in Douglas," Brandau said. "There's a market over there."

Through the trap door
Finding the indoor operations is more difficult than spotting outdoor marijuana fields from the air, authorities said. But sometimes they get lucky.

In February 2003, Lawrence Police Detective Dan Ward spotted a trap door while serving a nondrug-related search warrant in a home in the 900 block of East 13th Street. Ward testified he heard a "gurgling sound," opened the door, and discovered a growing operation of roughly 40 plants.

One common way to find the drugs is the time-tested method of getting people to squeal.

"Without divulging too much as far as investigative techniques, people tell on people," Dunbar said. "Law enforcement does their job. They'll get somebody with a joint or in possession of a bag of marijuana -- of course they're always wanting to find out where it comes from."

Rick Frydman, a Lawrence defense attorney, said he thought it was common for police to find growing operations by going through trash, conducting surveillance of stores that sell equipment used for growing marijuana, or obtaining people's energy bills to see if they're unusually high. Grow lights consume a lot of electricity.

Mysterious numbers
At the end of each year, the KBI asks sheriffs to submit a report on the number of plants seized in their counties. The totals are reported to the federal government. The number of plants helps determine how much pot-fighting grant money Kansas receives from Uncle Sam in coming years.

That type of marijuana -- known in common parlance as "ditch weed" -- is still subject to the eradication program even though officials say smoking it does little more than give the user a headache. In the 1970s, that type of marijuana was packaged by the kilogram and often sold to be mixed with more potent marijuana.

As with any crime statistics, the numbers should be taken with a grain of salt, officials said. The reporting of the data to the KBI is voluntary, and some cases fall through the cracks.

Few details
For example, the case discovered by Ward in February 2003 apparently didn't make it onto the KBI's annual summary.

But Brandau said he suspected that even if all agencies reported 100 percent of their busts, Douglas County still would be at the top of the list for indoor growing.

But even when cases are included in the KBI's report, it can be difficult to find more details about them. For example, on July 3, 2003, the Drug Enforcement Administration seized 157 high-quality sinsemilla plants, what amounted to the biggest indoor bust of the year in Douglas County, according to the KBI's figures.

But a DEA spokeswoman for the agency's Midwest offices said she didn't know anything about the case. KBI officials said they couldn't release information about it, in part because it was being handled by the DEA.

Legalization debate
In Kansas, first-time possession of marijuana is a misdemeanor. A second offense becomes a low-level felony. Cultivation of marijuana -- defined as growing five or more plants -- is a felony on first offense that can fetch anything from probation to four years in prison, depending on the offender's criminal history.

Voters in many states have moved to decriminalize or reduce penalties for the drug in recent years, but Brandau said he didn't buy the argument marijuana was harmless.

He cited federal statistics showing that about 67 percent of people on probation are past marijuana users. In 2002, about 36 percent of high school students admitted using marijuana in the past year, the figures showed. Figures from a "Children's Report Card" for Douglas County released last week showed the percentage of teens here using marijuana had grown from 12.9 percent in 1999 to 16.5 percent in 2003. 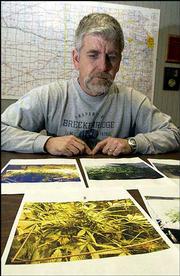 "I think marijuana really is our biggest problem, and it's because of what it does -- opens up illegal drugs to our young people," he said. "It really does need to be attacked."

Frydman, the Lawrence attorney, takes the opposite view. It's ridiculous and hypocritical, he said, that the government prohibits marijuana but allows the use of deadly cigarettes.