Janet Jackson's performance with Justin Timberlake at the Super Bowl halftime show on Sunday has sparked a federal investigation and set new standards for raunch in an entertainment industry that seems to be setting new highs -- or lows -- every day.

Gone are the days when a powerful performance is all that's needed to deliver a water cooler moment. Today, a barely there outfit, same-sex smooching, foul language -- and now, a flash of nudity -- are what's required to get America talking.

When Timberlake snatched off part of Jackson's bustier, revealing a breast clad only in a sun-shaped "nipple shield," the decency barrier was not broken, it was shattered before 89 million viewers.

Federal Communications Commission chief Michael Powell said in a statement, "Like millions of Americans, my family and I gathered around the television for a celebration. Instead, that celebration was tainted by a classless, crass and deplorable stunt." He promised an investigation, with potential fines of up to $27,500. If applied to each CBS station, the fine could reach the millions.

Despite the apparent premeditation -- the display coincided exactly with Timberlake singing, "I'm gonna have you naked by the end of this song" -- all involved denied that the peep show was planned, and Jackson and Timberlake both issued apologies.

"This was done completely without our knowledge," said Chris Ender, entertainment spokesman for CBS, which was deluged with angry calls. "It wasn't rehearsed. It wasn't discussed. It wasn't even hinted at. ... This is something we would have never approved. We are angry and embarrassed."

The NFL said it was "extremely disappointed." Several members of Congress, the Parents Television Council and the Traditional Values Coalition expressed outrage. Even halftime producer and CBS corporate Viacom cousin MTV -- the network that has given us "Jackass" and Madonna kissing Britney Spears at last August's MTV Awards -- was contrite. 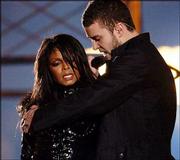 Justin Timberlake reaches across Janet Jackson during their performance, just before he pulled off the covering to her right breast, during the halftime performance at Super Bowl XXXVIII in Houston. The FCC said Monday that it would launch an investigation into the televised incident.

Although Timberlake issued a statement shortly after the show blaming the debacle on a "wardrobe malfunction," in comments to the syndicated show "Access Hollywood" right after the incident, he didn't seem too sorry.

"Hey man, we love giving you all something to talk about," he said, laughing.

Jackson's official Web site was bombarded with angry postings. Her spokeswoman, Jennifer Holiner, said a red lace garment was supposed to remain when Timberlake tore off the outer covering.

In a statement released Monday night, Jackson said it was a last-minute stunt that went awry.

"The decision to have a costume reveal at the end of my halftime show performance was made after final rehearsals. MTV was completely unaware of it," she said. "It was not my intention that it go as far as it did. I apologize to anyone offended -- including the audience, MTV, CBS and the NFL."

But the display still raised questions such as: If it was an accident, why did a choreographer promise "shocking moments" in an interview with the Web site MTV.com prior to the show? And how could it be a coincidence with the timing of the words to Timberlake's song "Rock Your Body"?

MTV Networks Group President Judy McGrath says the shocker was supposed to be Timberlake's appearance -- not what he did afterward.

Jackson has a new album, "Damita Jo," due out in the spring. The single "Just a Little While," hit radio late last week, and many people suspected a publicity stunt.

"The vast majority of folks, 90 percent, think it was staged," said Pete Snyder of New Media Strategies, an Internet research firm that polled 1,500 Web users Monday. "They don't think it was particularly exciting," he said, because Janet Jackson "is a total has-been."

Over-the-air TV channels cannot air "obscene" material at any time and cannot air "indecent" material between 6 a.m. and 10 p.m. The FCC defines obscene as describing sexual conduct "in a patently offensive way" and lacking "serious literary, artistic, political or scientific value." Indecent material is not as offensive but still contains references to sex or excretions.

The FCC has come under fire from lawmakers and outside groups who say the agency hasn't done enough to shield the public from indecent programming. The Bush administration has endorsed a bill raising the $27,500 maximum fine to $275,000.