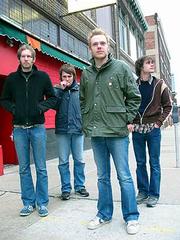 KC's The People -- (L to R) Ryan Shank, Kenn Jankowski, Ben Grimes and Harry Anderson -- stand outside the Brick, one of their favorite places to play.

lawrence.com :: Have you started the new record for Astralwerks?

Ben Grimes :: Yeah, the recording, all the tracking is in the bag, it's all done. And actually, as we speak, this week we have a guy, Michael Brauer, he's finishing mixing all the tracks. So that'll be done on Thursday (Jan. 29th).

And where is Michael Brauer?

He's in New York. He's the guy that some of the people--a lot of the EMI records have been mixed by him. He's really great.

You kept your pending deal with Astralwerks a secret a long time. Why the secrecy?

The People / The Billions

... There was just kind of a general fear of it getting around and there coming some point where basically everybody in town had decided they had heard from somebody that we had signed when actually we hadn't. Then if it turned out that the deal fell through or whatever it would end up being this thing where we have to be going around and people going, "Congratulations! We heard that you were signed." And It'd be like, "Well, no, actually we're not signed." And we just wanted to avoid that stuff. And we also just wanted the suspense and the joy of just being able to make some sort of official announcement of being signed 'cause that's sort of the ultimate goal for that certain plateau. We were excited to get to announce to our friends, like, "Hey, we got signed," and sort of the big "Hurrah!" reaction.

What kind of contract are we talking about?

If we stick onto it throughout the duration we'll be with them for six albums. There's options in there. It's not just a steady six album thing where we're stuck for six albums. If we run the course it'll be six albums.

Are you getting your wish list together for collaborations with Astralwerks artists?

How did you get the attention of Astralwerks?

Through our manager (Ben Weber). Right around the time that we got hooked up with him, he was friends with some of the guys from the label. And he was like, "Hey, there's this band I'm thinking about picking up and working with and I just wanted to see what you guys thought of 'em, and played us for them." And they actually told him that they wanted to make us an offer before we'd even signed our deal with our manager. So it was kind of funny. There was one phone call, saying, "Yes, I've decided that I will manage you, and Astralwerks wants to sign you." And this was early Spring of 2002. So we've basically been talking to them since then, and finally finished our deal with them last summer.

You guys can keep a secret.

Yeah, we managed to stay very hushed about it. Which was good because it kept us from getting too excited about it. I mean, 95 percent of the time most bands get that one thing that gets them really excited and they think something great is gonna happen, and most of them, it really doesn't happen. ... A few days ago I was talking to a friend of mine. He was talking to me like I was the most successful musician he'd ever met. And I was talking to him like, "We haven't done anything yet. The album's not even out." The album might suck. I'm the last person who would know if the album sucks 'cause I'm too close to it. When it comes out maybe it'll suck and we'll sell 50 copies in Kansas City and that'll be it. And then we'll get dropped and we'll fail and I'll die an accountant or something. ...

So if you started negotiating in '02, you must have released The Basement Recordings EP in the shadow of all that.

... We recorded that right in the midst of that. That was actually recorded for a guy at Atlantic Records. The way that it happened was I got a call from a guy at Atlantic Records. I just think that he pulled my name out of a hat or something. ... It really was that weird. He had downloaded one of hour songs off of the internet and thought it was pretty good. And he was like, "If you guys work on it and make a good recording I think you could go somewhere." And that was as far as anything went with him, but it did make us go "Oh my gosh, Atlantic Records on the phone, we need to record a better recording." And we went and did The Basement Recordings in our basement in less than 48 hours, and like six or seven songs. And then we sent it off to him and he called me back and he's like, "This isn't very good. Give me a call back when you have something else." And within days of that it was when Astralwerks got a copy of that recording from our manager. And they loved it. So that was what they signed us based off of.

Will the new record be a progression of style for you?

... We had a different lineup, like four or five years ago, and we put out this album that we recorded ourselves. It was terrible. It was a totally vain attempt to sound like Radiohead. On that album we were just over-the-top experimental, just trying to make everything all keyboardy and weird and atmospheric and all this stuff, not even true to the music that we're listening to, just true to what kind of thing we thought would sell with what the musical climate was at that time. And it was crap, just a terrible album. But there actually are some elements of that kind of thing in what we've done with this album. There's a couple tracks that kind of ended up coming off a little bit dancier. And there's definitely a lot more energy in this recording than what there was in Basement Recordings and previous stuff. We were trying to keep it raw and very guitar-centered, but also add some little panache that hadn't been there before.

Are you staging a return to your glam origins?

There actually are a few things on there that are--I allowed my David Bowie influences to come through a lot more on some of the stuff on this album than what I have been. I've been trying really hard to wrestle this beast of being in a band and writing songs and being a front man and doing all that stuff. There's these two things that come up in me with that. One of them is pride, like I just want to be prideful. And one of them is humility, like I really want to be humble. A lot of times people will come up and say, "Hey, I like your band" or whatever, and I'll find myself just wanting to be a jerk for no reason except that I just want to be prideful about it. But it's like I don't want to be that person, I want to be this humble, nice person who actually knows how to deal properly with people. But I just have the weirdest complexes about receiving complements. So that all kind of seeped into this whole thing--I didn't want to come off with any sort of snobbery in the music, but ultimately it's my favorite kind of music. So I kind of let it come through a little more.

So the latest rumor about you is that you got a $1 million album budget.

(Hysterical laughter) Are you kidding?!

Thank you. I hadn't heard that. That's very exciting for us.

That is exciting. So are you going back into the studio to move shit around? Maybe add an orchestra?

You must be excited to be playing in Lawrence again. It means you've truly arrived.

I have to assume they're bribing our speeding ticket-fattened police force. As a band, you moved to Springfield, Missouri for a while. I've never heard of anyone going there voluntarily.

It's pretty terrible. It was a bad move but a good move at the same time. 'Cause it gave us a place to go through our awkward stage, not that we were completely out of that when we got up here, but like the first year that we were a band. The first year of any band is just so awkward. You're kind of getting your sea legs so to speak, and just trying to figure out what kind of band you're going to be and what type of performers you're going to be and stuff. And we were really geeky and we were really bad, and there were a few bands that we really wanted to be friends with, and none of them would be friends with us. They thought we were the biggest idiots. ... We were that band that if you met us, the way we talked about our own music, you'd be like, "This must be the best band in America." And then you'd come see us play and it was just crap. And then after the show we'd be like, "Hey, so, pretty good right?" And everybody would be like, "No, it was terrible! ..." I have a collection of old videos of those old shows and they're awful, they're so bad. They're fun to watch.

Who were some of the bands that gave you trouble.

The main band that we had beef with was Johnny Q. Public that came out of there. They were a Christian band for a while on some Christian label out of Nashville or something. Then they tried to turn mainstream industrial or something like that and they got signed to Roadrunner Records. And Roadrunner released their album and they sold like five copies and got dropped and then they broke up the band. In the midst of that, right before their album came out, they became the biggest snobs. And when that first album we did, that horrible album, when we got done with that, one of the first things we did was we went and gave them copies of it. And right in front of our faces they grabbed the copies, opened them up and started breaking the cds. ... When they did that, the were actually en route to a Christian music festival that they were playing.

What do you stand for?

I don't know. Good things. I don't believe in any throwaway lyrics. I hate when bands use throwaway lyrics that don't mean anything--they're there to rhyme. And I hate when lyricists or musicians or whatever use strictly sex to sell an album or strictly hate to sell an album. It's just too easy. If you want to make somebody mad, that's easy. I can make anybody mad in no time. But if I want to make somebody feel something important about relationships, how to treat one another, how to respect women or be tolerant of other people and that kind of stuff. I can't in good conscience write a song without saying something that I believe people should hear.