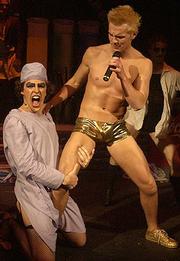 Scott Coxx as Frank-N-Furter, left, and Brian Shortess as Rocky amidst a lover's quarel during the Rocky Horror Picture Show production in Kansas City two weeks ago. The show comes to Lawrence this weekend.

If you don't already know these two things by the time you set foot in The Rocky Horror Show, you may be in for a surprise.

"It's got cross-dressers, aliens, nudity -- the nudity is the part that brings most of the people," said Spencer Brown, who plays the character of Riff Raff. "Generally, you won't get many conservative people coming to see it, which is a good thing, because I can imagine a lot of people walking out at intermission if they didn't know what the show was about."

"Slut" and "asshole" were just two of the many R-rated phrases shouted by the crowd during a recent performance at the Just-Off-Broadway Theater in Kansas City. During the course of the two-hour show, which comes to Liberty Hall for three shows this weekend, lingerie and feather boa-clad audience members also yelled: "Sing it asshole, it's a musical!", "Why don't you tell her about being a child molester?" and "Do you need any Tupperware, bitch?!"

"We stopped at McDonalds on the way here just to see what kind of looks we'd get from people," said Erika's mother Rhonda, who, in her black leather miniskirt and platform boots, looked every bit as rakish as her daughter. "Her Dad would kill me if he knew we were out like this."

Human race despair
Such are the devotions inspired by Rocky Horror, a campy, rock-and-roll fueled musical that debuted at a tiny London theater in 1973 and has since turned into cult phenomenon. The show -- written and composed by Richard O' Brien -- gained worldwide notoriety with a popular Broadway run and particularly after being adapted into a movie by Jim Sharman (who changed the title to "The Rocky Horror Picture Show"). Both the theatrical and cinema versions invite audience participation in the form of scripted (and unscripted) talkback lines, easy-to-learn dances and coordinated audience participation involving props such as newspapers, rubber gloves and confetti.

Though the movie's midnight showings have been popular in the United States since it debuted in 1975, a ban on amateur productions prevented it from being experienced live through most of the '90s. When the London-based Rocky Horror Company opened it up to amateur productions in 2000, Kansas City-based director Steven Eubank saw an opportunity to bring the live show to his hometown for the first time.

"I think there is a large demand for theater with message and theater that really makes you think," Eubank said. "I don't really do that theater."

Instead, the 20-year-old Eubank is known in Kansas City for directing shows that are the theatric equivalent of B-movies. Since he began directing at the age of 14, Eubank has produced "Hedwig and the Angry Inch," "Saucy Jack and the Space Vixens" and "Vampire Lesbians of Sodom" among others.

"I always make sure that an excellent rock and roll score is present," said Eubank, who composed the backing tracks for Rocky Horror with help from his father Jeff (who also assists with set design).

Rocky Horror follows the sexual awakening of the tight-trousered Brad Majors and his girlfriend, Janet Weiss. Marooned in the middle of a forest, they encounter the licentious castle of Dr. Frank-N-Furter, a transvestite scientist with an insatiable sexual appetite. Surrounded by a miscreant group of freaks and perverts, Frank-N-Furter unveils his newest creation -- a brawny, brainless hunk named Rocky whose sole purpose is to fulfill his master's sexual desires.

Inevitably, Frank-N-Furter's experiment goes awry, sending himself and the cast into a downward spiral of sabotage and deceit.

"The moral of Rocky Horror would seem to be, 'Don't dream it; be it -- live your fantasies and all that kind of stuff' ... yet all the people who seem to live by that either end up dead or depressed," said Eubank, laughing. "I think (author Richard O' Brien) ... was trying to mimic the B-movies that he grew up with. All those movies are horribly campy, horribly over-the-top and end on this really solemn note that basically says, 'Human race despair.'" 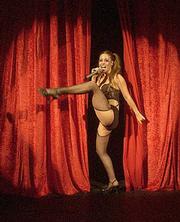 Time warp
Eubank and a cast of about a dozen local actors debuted the show at The Penn Valley Little Theater in KC, Mo. in 2000. For Rocky Horror's 30th anniversary last October, Eubank revived the show at the Late Night Theater in Kansas City, a tiny venue with a 77-person capacity.

Among those impressed with the Late Night show was Lawrence-based promoter Jeff Fortier, who offered to help bring the group to Liberty Hall.

Fortier said he considered the show a risk, but a worthwhile one based on its quality.

"The show was about 20 times better than any of us thought it would be," Fortier said.
"I think there's a niche for eclectic theater in this market that hasn't been tapped ... hopefully Lawrence will prove me right."

Liberty Hall holds more than five times as many people as any of the theaters the show has occupied previously, offering a larger stage and also a whole new set of challenges.

"I would love to get the cast out into the audience's faces a bit more," Eubank said.
"A lot of our concerns were: Will this larger show translate? Will it still feel intimate? Will it still be engaging? I definitely think the answers to those questions are 'yes.'"

Eubank and his team will have two days to prep the theater and only a few hours before Friday's midnight show to rehearse. 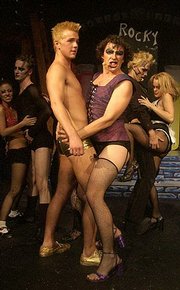 "There's some stuff that we just won't know about until we open at that midnight on Friday," he said. "The cast is ready to do this under the gun."

Sweet transvestite
The 13-person cast ranges in age from 19 to 26 and includes amateur and professional actors from the Kansas City area.

Scott Cox plays the role of Frank-N-Furter, the androgynous, lingerie-clad leader from the planet Transexual who seduces Brad into his perverted clutches.

Cox, a classically trained actor who speaks and translates ancient Greek languages, said he prefers doing classic theater but enjoyed the opportunity to play such an outrageous character.

"I think this show is ridiculous," Cox said. "But when you've got that much love pouring out of the audience you can't give anything less than 100 percent."

Cox is one of the few characters in the musical who are allowed to improvise and interact with the audience. During one recent show, he had trouble getting out of a hospital gown. "Get this f*ing thing off of me -- I look like a sack of potatoes," he ad-libbed as his servants struggled to free him from the blue gown.

"I can do just about anything -- that's an actor's dream come true," Cox said.

Erick Smith, who plays Brad, said being involved with Rocky Horror spurred a deep personal change in his views towards sexuality. 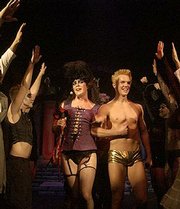 Frank-N-Furter, left, and Rocky make their way down the marraige isle.

Raised in a conservative Christian family, Smith was initially timid when it came to working with gay actors and actresses.

"I came out a better and different person because of it," Smith said. "A couple years ago I was very not OK with (homosexuality), and now I'm totally for gay rights and I have best friends that are gay."

"I have very few inhibitions anymore -- I mean, I've been on a stage in a teddy."

Sponge Bob Transvestite Pants
Show-goers at Liberty Hall will be able to purchase $5 prop kits before the show containing rubber gloves, newspapers, confetti and playing cards. Prior to the show, cast members will offer a tutorial on how to use the props.

While earlier incarnations of the live show also employed toast, rice and hot dogs, perishable food has fallen out of fashion recently due to health code violations.

"Generally the rule of thumb is if it's going to attract bugs don't use it," Eubank says.

Fans wishing to brush up on audience participation can find dozens of websites devoted to talkback scripts by searching the internet with the phrase "Rocky Horror Audience Participation."

Eubank warned, however, that there's no such thing as an authoritative script and the scripts are constantly evolving to accommodate new pop-culture references.

"One of my new favorite callout lines is when Columbia says, 'You're like a sponge' and people yell, 'He lives in pineapple under the sea,' referring to Sponge Bob Square Pants,'" Eubank said. "That's just brilliant to me."

Editor's note :: Our sincerest apologies to Steven Eubank, whose name is not 'Eubanks,' as we published in our Deadwood Edition.

Is The Rocky horror going to come back to kansas city this year.