Inside The Skin Of a Killer

Charlize Theron Tears Into Role of a Lifetime In Violent 'Monster' 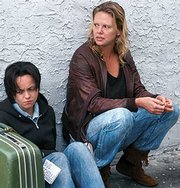 In less than two hours, Charlize Theron changes from second-tier actress to a formidable candidate to hoist that golden trophy above her head come Feb. 29.

In "Monster," an imagined account of the final debacle of the life of Aileen Wuornos, the drifter-prostitute executed by the state of Florida a little over a year ago for the murders of six men, her performance is that darn good and that scary. Adding considerable weight to her frame, greasing herself up into a sort of uber-trampiness and using such makeup as a legion of freckles and animalistic yellow teeth (but no prosthetics), Theron has rendered herself 100 percent unrecognizable. Not since Robert De Niro morphed into hulk dimensions to play heavyweight boxer Jake La Motta in "Raging Bull" has there been a transformation this powerful and effective.

Her achievement is more than skin-deep. As the mannish, aggressive Aileen, she's got swagger Jack Palance would die for. She thumbs rides like a biker. And she throws her head back like a redneck walrus before downing cheap beer. Rage can cross her face like an instant thunderhead. She's a hopelessly angry, burly person who's incapable of living in the real world, who has only had her own shoulder to cry on.

That is, until the homeless drifter meets Selby (Christina Ricci), a vulnerable young girl who is on the verge of discovering her sexuality.

A date at the roller skating rink does it. These two realize they are passionately in love, and for Aileen, nothing else in the world matters. Selby runs away from a rigidly religious home to be with her newfound soul mate. Aileen, who suddenly finds herself the breadwinner in this nomadic relationship, returns to her old habit of prostitution. For Aileen, it's easy money, though not big money. She flags down motorists, takes care of their needs and moves on to the next.

But when one of her "johns" turns nasty, everything changes. Aileen finds herself tied at the wrists and undergoing unspeakable sexual abuse. Determined to survive for the new woman in her life, Aileen turns the tables with brutal success. Suddenly she sees a new way. These men, with their nasty little requests, deserve anything they get anyway. And their cars -- sans license plates, of course -- are very useful. Serial murder becomes the grisly means to a rapturous end: love and happiness with Selby.

The movie touches on the factual highlights regarding the real Aileen "Lee" Carol Wuornos, who died by lethal injection Oct. 9, 2002. But it frees itself to speculate on the emotional particulars of what happened. There has always been some doubt about the truth anyway. Did the real Wuornos kill her first victim in self-defense, as she claimed? What about the others? All the victims are dead now. And Wuornos changed her testimony on the matter many times.

Also, "Monster" doesn't get into Wuornos's deeper story, the one that involved her having a child at age 15, a mother who deserted her, a physically abusive grandfather who raised her, a history of stormy rages, aliases, robberies and, once in prison, a hysterical impatience to bring on her execution. (There has been extensive media coverage about Wuornos's life, as well as books, two documentaries, a few made-for-television films and even an opera.)

But "Monster" deals in emotional effect, not documentary facts. It's about a love affair that perseveres through the most hideous and unbearable of circumstances. And it's refreshing to find a female character who hasn't been tinted, brushed and varnished into ridiculous pulchritude (see Nicole Kidman in "Cold Mountain") or, failing that, who isn't flag-wavingly heroic in the "Erin Brockovich" mold.

Improbable as it sounds in such a brutal protagonist, Aileen has a three-dimensional credibility. Theron and debuting writer-director Patty Jenkins make it their mission to evoke the humanity in this woman and to make us realize that, especially in that horrifying first murderous encounter, Aileen certainly isn't the monster. She becomes one as she starts killing in quantity and removing blood from the cars with a bottle of window cleaner.

And yet, she isn't thinking murderous thoughts; she's thinking about love. She's thinking about the car and the dollars that will make an increasingly demanding Selby happy. And thanks to that bighearted performance from Theron, we're rooting for her a lot deeper into the film than we ever expected.