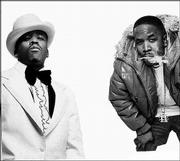 Atlanta hip-hop act Outkast is nominated for six Grammys, including Album of the Year and Record of the Year.

One week after the Super Bowl, the Grammys now offer this Sunday's most dominant and overhyped entertainment option.

And like the flashy Super Bowl halftime show, it's the best place on earth to celebrate style-over-substance. We can only pray that Missy Elliott won't be disrobed by Justin Timberlake at the awards show.

In the grand scheme of things, the Grammys don't matter very much. Compare the ceremony to the Oscars, where an award can immediately catapult an actor onto the A-list or can boost the box-office revenue of an obscure picture by millions.

There is no real evidence to suggest that winning a Grammy adds a great deal of career clout to an artist. Nor does it impact album sales to any noticeable degree. Did any more than a few hundred people buy The Dixie Chicks' "Home" last year BECAUSE it earned Best Country Album?

Part of the reason is there are so many categories -- dozens upon dozens -- that even nebulous musical art forms such as polka have their own awards. The common logic in the music industry is that if you stick around long enough, you'll end up with a Grammy.

Another problem is that few remember who the winners are. There is simply no legacy to the selections. Unless the choices are particularly embarrassing (for example, Jethro Tull for 1988's Best Hard Rock/Metal Performance), the victors are soon forgotten. There are thousands of folks who can tell you the batting averages of the 1946 Chicago Cubs, but does anybody really remember who scored Best Latin Pop Album in 1996?

So rather than try to predict who will win in the major categories this year, it's time to undertake a different tactic. Let's figure out which -- if any -- of the nominees have a chance of surviving into the next decade. Will the Song of the Year still be found on radio playlists in 2010? Can the Best New Artist continue to forge a career in the industry?

It's certainly fun to speculate ... more fun than actually watching the Grammys.

This is always the most interesting category because it's so easy to measure in retrospect whether the winners proved legitimate. For instance, Lauryn Hill nabbed this award five years ago. In terms of commercial impact, Hill has since disappeared as thoroughly as Amelia Earhart. For every success story like The Beatles or Sheryl Crow in this category there is a Bruce Hornsby and the Range or -- yikes -- Milli Vanilli to balance that out.

Front-runner Evanescence is already coming apart at the seams. The goth-rock band was founded by singer Amy Lee and guitarist Ben Moody, and the latter quit the franchise in the midst of touring a few months back. The talented Lee might eventually have a viable solo career, but expecting this band to remain together as a unit is unlikely.

R&B vocalist Heather Hedley and dancehall DJ Sean Paul are respectable nominees. But nothing truly separates them from dozens of entertainers in their respective genres.

Bulletproof-vested rapper 50 Cent will either be dead, imprisoned or enormously famous five years from now. The smart money is on incarceration.

That leaves power-pop group Fountains of Wayne, who had a respectable radio hit with "Radiation Vibe" in 1996.

Defining the New York quartet as a "new act" is as factually descriptive as calling Britney Spears a "virgin." But such is the logic of the logic-free Grammys. The very fact that Fountains of Wayne has been charting for eight years makes this pick a no-brainer.

Song of the Year

It's nice that two washed-up artists from the previous decade can be nominated as songwriters for other performers in this category. Ex-4 Non Blondes leader Linda Perry penned Christina Aguilera's "Beautiful" and mulleted balladeer Richard Marx co-wrote Luther Vandross' "Dance With My Father." Both of these weepy tear-jerkers may feature prominently at future wedding receptions, but that's about it in terms of shelf life.

Can't blame the National Academy of Recording Arts & Sciences for wanting to honor Warren Zevon, who died of lung cancer in September. But, honestly, Zevon had been churning out material since the late 1960s, and I can't name any song by him other than "Werewolves of London." His nominated "Keep Me in Your Heart" is competent but unremarkable.

Avril Lavigne's "I'm With You" is as bland as Lavigne.

Eminem's hip-hop anthem "Lose Yourself" is the standout in this field. It's got a hypnotic guitar riff and moody groove. Atypical lyrics always impress ("Tryin' to feed and water my seed/Plus teeter-totter caught up between bein' a father and a prima donna"). If nothing else, it will always be remembered for being a prominent part of the excellent film "8 Mile."

Record of the Year

Beyonce's "Crazy in Love" and The Black Eyed Peas/Justin Timberlake collaboration "Where is the Love" are as forgettable as their generic titles. The pulsating "Clocks" is another fine song from the British quartet Coldplay. Yet it's probably the fourth or fifth strongest tune on the band's "A Rush of Blood to the Head." Eminem's "Lose Yourself" is a great track, but in terms of "Record of the Year" -- which is as much about production as it is composition -- Outkast's "Hey Ya!" is definitely this season's best-orchestrated radio ditty. Sure, everybody is sick of it by now. But praise must be heaped on making a repetitive, three-chord bop such a hummable delight. We'll be hearing this song from now until our deathbeds.

Album of the Year

I have a special place in my heart for Evanescence's "Fallen" because I wrote the band's bio for their press kit months prior to the album's release. It's great to see a bunch of unknown kids from Arkansas go on to sell eight million records. But sentimentality aside, I thought their hit single "Bring Me To Life" was hands down the best cut on the disc. The rest of the debut project was too uneven to be deemed one of the year's five top offerings.

Don't get me started on the overpraised Missy Elliott or the overexposed Timberlake. History will not treat them kindly.

This category is really between The White Stripes' "Elephant" and Outkast's "Speakerboxxx/The Love Below." Both are quirky, entertaining and have an unmistakable sound. They're enormously popular with critics AND the public. Call this one a draw.

And both acts will perform live at this Sunday's ceremony. Hmmm, maybe I'll pry myself away from the new "Curb Your Enthusiasm" episode long enough to watch some of the Grammys.