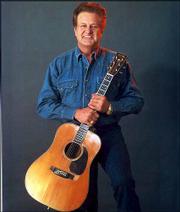 The late Bill Monroe was known as the father of bluegrass music. To James Monroe, he was simply "father."

"People expect more of you if you're the son or daughter of somebody famous," says Monroe. "They don't know exactly what to expect, but they know what Bill Monroe has done. I can't get up there and NOT be a very good musician and get by with it. I got to come with it pretty good."

For nearly 40 years, James Monroe has done just that.

Since being recruited at the age of 22 to perform with his dad's band, the guitarist/vocalist has continued to keep the legacy of bluegrass alive for new generations of listeners. But considering that Bill and his Bluegrass Boys literally invented the style, it's surprising to note that James never showed much interest in a musical career while growing up.

"I wanted to be a ballplayer, says Monroe from his office in Nashville. "I pitched in high school and that's what I wanted to do. I had good ability -- I had a good fastball and a pretty good curve -- but I just didn't follow it through. Then my dad got me into music and I just didn't get back into it."

Although he was raised watching the Bluegrass Boys perform all over the country, Monroe had never picked up an instrument. So he was all the more stunned when his father told him during a trip to Georgia that he would be joining him on stage as a guitarist.

"I said, 'I've never played before!' But he said, 'Just don't worry about that. Keep time with your right hand, don't worry about nothing else' ... I didn't know what I was doing. I was embarrassed to death. I stood behind my father and any time he moved I followed him. I didn't want nobody to see me.

Artistic heaven
At 60, Monroe is one of the reigning ambassadors of bluegrass.

"He's real respected in the industry," says Leo Eilts, organizer of this weekend's Free State Music Festival that features Monroe and his Midnight Ramblers as the headliner.

"I think that came hard for him too, because people held him to a pretty high standard. It's like any kid of a famous musician or author or actor: They've got to prove themselves. But he's never held himself up to being a big star. He's just a working musician out there."

With the mammoth resurgence of traditional American music during the last few years -- thanks in large part to the movie "O Brother, Where Art Thou?" and its multiplatinum soundtrack -- Monroe has worked especially hard lately to promote his signature style. In addition to frequent touring, he also produces the Bill Monroe Memorial Day Weekend Bluegrass Festival in the icon's birthplace of Rosine, Ky.

Despite his constant immersion into all things bluegrass, he still battles with the fact that the style is often misinterpreted.

"Some people just never truly have heard it, and they don't understand how good it really can be," he says. "It's not just homespun mountain music; it's more than that. They identify hay bales with that music sometimes. That's not how it works. Bluegrass is really an artistic type of music. You have to understand music pretty well to play it."

No one will question that his father understood it well. When Bill passed away in 1996 at the age of 84, he left behind a legacy that was unrivaled.

A joke that circulated around Nashville at the time encapsulates his reputation: A musician dies and goes to heaven. During a tour of paradise, he is passed by a silver-haired figure dressed in a white suit and Stetson and carrying a mandolin.

The musician asks St. Peter who it is.

The next generation
While Bill also had a demanding reputation when it came to music, James asserts his father's advice was always welcome.

"He would never try to force his ideas on a person," Monroe reveals. "But he would tell me things like you want to try and sing in whatever key fits your voice; keep your timing right and always follow the melody so the audience can understand what you're playing ... Those traditional ideas of his, I want to hold onto and keep in my music."

Monroe says that perfectionist attitude extends to his own band, which also includes banjo, bass, fiddle and mandolin. Likewise, he's passed along his knowledge of bluegrass to his 36-year-old son Jim, who is also a talented guitarist.

"I drive my music pretty hard," he says. "And the boys that work for me, they'll tell you I push pretty hard on my music."

Now in his fourth decade of performing, Monroe is often told that the older he gets the more he is starting to look like his father. 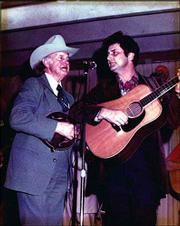 James Monroe, right, shares a stage with his legendary father Bill Monroe, circa the 1970s.

"I don't mind that at all," he says. "He was a great man. I'm proud of him. I'm proud of my heritage. And I'm proud to still be carrying the Monroe name out there."