Square (now Square-Enix) makes its triumphant return to a Nintendo system with a new effort out of the Final Fantasy series. Remember, we haven't seen an FF game on the Gamecube since the SNES days. 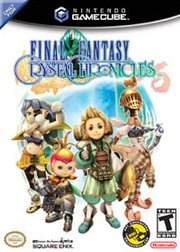 You are thrown into a mystical land that is infected with a misty toxin "miasma." The towns are protected from the poison by a big crystal at the center of town. However, over a year the crystal loses its effectiveness and must be refreshed with myrrh. Your objective is to search out the mystic land encountering monsters, hell, high water and dungeons to retrieve myrrh for the towns.

From the time you turn on the 'Cube to the time you set out on your first quest, you are met with gripping, top-notch presentation that suggests that you're about to be enveloped in a deep, character-driven story with enviable magic and battle systems. I wish I could affirm that, but sadly I can't. As a matter of fact, it feels more like a sophisticated version of Gauntlet more than it does its pedigree. That being said, the game is purely designed around the multiplayer mode using Game Boy Advance connectivity.

To be protected from the miasma when wandering out of towns, you must carry an enchanted chalice that provides a protective radius around your body. Since it makes no sense for you to carry it in single player mode, you have a little mog that carries it for you. In multiplayer mode, you or one of your friends must carry it, which can prove fairly mundane for that person.

You can use the Game Boy Advance as a controller, having the items menus pop up on the GBA instead of the main screen as to not interrupt play. This obviously benefits multiplayer more than anything, although there are a couple of issues. First, the connectivity isn't necessary. An opaque quarter-screened menu could've been used on the TV screen to accomplish this same task. Also, since the controls were designed for a GBA, using the GC controller proves imprisoning since the extra buttons weren't used to free up cluttered button-mapping.

L and R buttons cycle through the options your A button will perform. These are attack, defend and two other items you can equip on the menu, usually food or magic. The B button is context sensitive. Sometime it will pick up items or talk to folks along the way.

Attacking isn't as furious as a hack 'n slash title like the Hunter: The Reckoning. You can mash the A button, but you will spend a lot of time running around to dodge enemies' repeated attacks rather than cycling through to your defend option. Stronger hits are performed by holding down A for a good second, then directing a target to where your moving enemy is. It's a pretty nice change, but takes awhile to get used to. Performing magic is the same way. One new feature is to equip two different magics to the two assignable slots and "fuse" them to create a more powerful fusion of the two. Unfortunately you don't garner and enhance your magic through the quest. When you move to a different area or dungeon, it all resets. You have to acquire the magic runes again from fallen enemies. This aspect damages any depth the magic system could've had.

However, using magic in multiplayer proves to be much more fun. You and your friends can decide which magic to combine and focus on the same area for a big wallop of fury. This is incredibly helpful during the latter part of your linear journey since the bosses; health bar gets increasingly longer. The difficulty doesn't seem to be tailored to the single player mode, unfortunately. Also, there is no real story or character development to warrant involving yourself into the game. So it's best enjoyed with friends...friends that have GBAs.

Puzzle elements are disappointing. Most "puzzles" involve picking up an item and putting it in a very near switch. It provides a mere road bump in progress more than anything. The bosses are really fun, when they aren't getting in front of your view. All have learnable patters that test your patience over ambition.

The aural and visual experience is not one to be missed. The opening sequence alone drenches you in original melodies with a high-quality orchestral score augmented by rich woodwind instruments. The graphic presentation has a very Zelda/Dark Cloud history to it. It's one of those games that transports you to a fantastic wonderland, forgetting about reality in brief intervals. The use of shadowing, lighting, mirror and water effects really show off the capabilities of the Gamecube that most third parties sadly ignore. This game is a showpiece, if anything. Nothing is compressed or sacrificed in the a/v department.

In the end of the 16 hour-ish campaign (it depends how much you browse the towns), you will leave with a strong sense of accomplishment if you've played with friends. Despite its shallow nature, it can be really fun. On the single player side, it doesn't quite measure up. It feels like an afterthought. It's almost as if it doesn't know what kind of game it wants to be. So if you have the luxury of friends who own GBAs, Final Fantasy: Crystal Chronicles is a project that may satisfy a unique multiplayer desire.