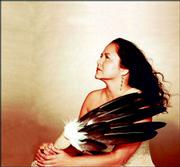 Singer and composer Joanne Shenandoah will bring her blend of ancient Iroquois and contemporary music to the Lied Center at 7:30 p.m. Friday.

Joanne Shenandoah was born to sing.

Her parents knew that from the beginning and chose the Oneida Iroquois name "She Sings" for their sable-haired daughter, who crooned at funerals, weddings and any place else she could find a stage.

But it took a tree to convince Shenandoah that making music was her true calling.

She had been working in the computer industry for 14 years, when, one day, she looked out her Washington, D.C., office window and saw a giant tree being cut down.

"I was uprooted at that point, I mean seriously uprooted," she says. "A very big symbol for us is the tree of peace. The great white pine is a symbol of our peace because our Peacemaker brought that tree, uprooted it and had everyone throw their weapons of war underneath the tree. So the prophecy is that one day everyone will hear about this great message of peace.

"So I saw this huge old tree being uprooted, and I was just like 'Oh my gosh, what am I doing with my life?' I need to be using my talents."

So Shenandoah, a Wolf Clan member of the Iroquois Confederacy, Oneida Nation, moved back to Oneida, N.Y., "where my ancestors sang their songs." Since 1990, she has become one of American's foremost native recording artists. She has released 13 CDs, won multiple Native American Music Awards and was among the nominees for the first-ever Grammy Award for Best Native Recording in 2001.

"A lot of people have, for too long, stereotyped what native music is," she says. "My music is all over the map. I have a children's album. I have some traditional music that's used in yoga, meditation, massage classes. And I have music that's hanging with Neil Young, so that's cool."

Life-giving music maker
Once Shenandoah decided to sing and write songs for a living, her very musical family made the transition easy. Shenandoah's father played jazz guitar with the legendary Duke Ellington. Her mother, a Wolf Clan mother, also played guitar, piano and sang. Even now, Shenandoah pairs with her sister and daughter at concerts.

"Our voices blend just wonderfully," Shenandoah says. "When you hear families sing together, it's just like one voice."

Music was always an integral part of Iroquois life, explains Shenandoah, who grew up on the Oneida Reservation.

"There's songs for everything in our life, from planting to bringing new babies into the world, for lifting our spirits, for honoring the women, honoring the animals," she says. "There's some very fabulous songs, and they are meant to literally take you to a place of celebration, which is a really fine thing."

Though her clear-as-water voice garners the most critical attention, Shenandoah's an accomplished instrumentalist, counting flute, clarinet, cello, piano and guitar as part of her musical palette.

"I will try any instrument, doesn't matter if I know how to play it or not," she says. "I want to try it because it seems like we have the gift. Our family, it's just amazing the talent that they have. So I've just picked up a harp this past year and am planning to get into that."

During her Lawrence visit, Shenandoah will speak at a community lunch about "Women in the 21st Century: Our Rights and Responsibilities."

The Iroquois live in a matriarchal system, and women have special responsibilities when it comes to shaping the community, Shenandoah explains. For example, women choose the chiefs and retain the power to remove them from office.

"There are several hundred songs in honor of women," she says. "It's great because at every single ceremony, the women are honored because we're considered life givers."

Massage and peace messages
Though Shenandoah considers herself a sort of cultural ambassador -- not only for her tribe but, more broadly, for the Iroquois message of peace -- she moved away from the reservation about 10 years ago.

"I needed to have a little more tranquility," she recalls. "I'd have people show up in the middle of the night, three in the morning, saying 'I love your music. You sound like Patsy Cline.'"

Shenandoah now occupies the 185-year-old home of Chief Shenandoah, an ancestor who helped save Gen. George Washington's starving army at Valley Forge during the Revolutionary War.

"They brought 300 bushels of corn all the way from Oneida to Valley Forge, and they say if it weren't for that one saving act, we'd all be speaking with British accents today," Shenandoah says.

Many people have heard Shenandoah's voice before and not known it. She's provided the musical backdrop for shows on public television, The Discovery Channel, HBO and the '90s favorite "Northern Exposure." Her music frequently makes it onto the play lists of massage therapists as well.

She is the co-author of "Skywoman: Legends of the Iroquois" (Clear Light Publishers, 1998), which tells Iroquois legends for readers ages 9 to 12. A musical production by the same name is set to air in March on PBS.

"The music is really an experience," Shenandoah says. "It usually ends up in a concert that people leave knowing other people and have enjoyed laughter, tears and a host of emotions, which is really a nice thing."