Los Angeles — Balladeer Luther Vandross, recovering from a stroke, won four Grammys on Sunday including song of the year for "Dance With My Father," and Beyonce earned a record-tying five honors.

OutKast won album of the year for "SpeakerBoxxx/The Love Below" in a ceremony televised by CBS on a five-minute delay to avoid anything like Janet Jackson's Super Bowl flesh flash.

Despite a tightly scripted show devoid of outrageousness or spontaneity -- a marked contrast to today's pop scene -- Jackson's breast-baring last week at the hands of dance partner Justin Timberlake remained the major subplot, as CBS and Jackson offered conflicting reports about why she was not at the show.

"I know it's been a rough week on everybody," said Timberlake, stifling a self-deprecating laugh while accepting the best male pop vocal performance award for "Cry Me a River." He brought his mother as his date. "What occurred was unintentional, completely regrettable, and I apologize if you guys are offended."

Vandross won for best song, best R&B album and best male R&B performance for "Dance With My Father"; and best R&B performance by a duo or group with vocals for "The Closer I Get to You," a remake he did with Beyonce.

He was unable to attend, but sent a videotaped message, his first public remarks since his April 2003 stroke.

"I wish I could be with you there tonight. I want to thank everyone for your love and support," said a weak-looking Vandross. "And remember, when I say goodbye it's never for long, because" -- and he sang -- "I believe in the power of love!"

Beyonce tied a record for female artists with her five awards, but won none of the top categories of song, record or album of the year.

The moody British rock band Coldplay, up against four hip-hop nominees for record of the year, won for their song "Clocks." 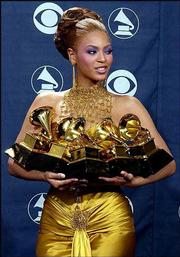 "Thank you, 50," said Evanesence's Amy Lee as the rap star smiled for the camera.

Beyonce, wearing a tight dress with a feather skirt that fleetingly revealed her pink panties, joined Prince on his hits and then sang her own "Crazy in Love," which won two trophies -- for best R&B song and best rap/sung collaboration. Her boyfriend, Jay-Z, won two awards for collaborating on that hit.

Her five trophies tied a record set by Alicia Keys, Norah Jones and Lauryn Hill for the most Grammys won by a female artist.

"This is unbelievable. Performing was enough for me," an excited Beyonce said.

Celine Dion is accompanied by Richard Marx on the piano in a tribute to Luther Vandross (onscreen) during the 46th annual Grammy Awards in Los Angeles. CBS used a five-minute broadcast delay through Sunday's award show to avoid the nudity scandal that plagued the Super Bowl halftime show the week before.

Other multiple winners included Jack White of The White Stripes and Eminem, with two each, and bluegrass singer Alison Krauss, who had three.

Timberlake was all over the awards, performing on several songs and winning two trophies. CBS said in a statement that it had reservations about allowing him and Jackson to appear as planned, but ultimately "respected the Recording Academy's wishes to produce the program they originally intended."

CBS said it agreed to allow Timberlake and Jackson as long as they apologized on the air for their Super Bowl stunt.

But a statement from Jackson's camp said CBS and the Grammys first asked her not to attend, then reversed themselves and re-invited her, but she chose not to attend.

"She was never uninvited," insisted Jason Padgitt of the publicity firm Rogers & Cowan, which represents the Recording Academy. "She was always invited to be here and she chose not to be."

The incident bubbled beneath the surface all night. "I don't want to have the same thing happen that Janet had done," Christina Aguilera said while accepting the award for best female pop vocal performance in a dress cut so low, CBS briefly imposed a graphic across her chest. "But, uh, if I can keep it together ..."

Pharrell Williams, who along with Jay-Z and OutKast also had six nominations, won his first Grammy during the pre-telecast ceremony for his production work with Chad Hugo as white-hot hitmakers The Neptunes. They have produced songs for artists ranging from Justin Timberlake to Jay-Z in 2003 alone.

The Neptunes weren't even nominated last year, because the record companies they produced hits for forgot to put them on the ballot.

"I was a little upset last year," Pharrell acknowledged during his acceptance speech. He also used the opportunity to stand up for friends Jackson and Timberlake. "What happened at the Super Bowl was a bit much, but I happen to know both of those people ... and they've done great things to support people around the world."

Cash, and director Mark Romanek, won for best short form music video for the haunting song "Hurt." Cash's wife, who died a few months before him in 2003, won best traditional folk album for the posthumous release "Wildwood Flower" and best female country vocal performance for "Keep on the Sunny Side."