Hollywood is playing mind games at the movies these days.

Memories are being erased like chalkboards. Sometimes they are wiped out entirely; at other times only the short-term recollection shorts out.

That is what happened to Dory, the blue tang with Ellen DeGeneres' voice in "Finding Nemo." And darned if Drew Barrymore isn't afflicted with the same memory malady, much to the dismay of the smitten Adam Sandler, in "50 First Dates," opening Valentine's Day weekend.

The conceit was used, to dramatic effect, in 2001's "Memento," starring Guy Pearce as a former insurance investigator who suffered a head trauma that left him unable to form new memories. Hunting for the man who raped and murdered his wife, he tattooed clues about the killer on his body.

No one's going to those inky extremes to jog memories, but many variations on the theme are cropping up in the movies these days:

"Paycheck" -- A 1953 story by Philip K. Dick inspired this sci-fi thriller starring Ben Affleck as a reverse engineer who devotes weeks, or years, to a job and then has his memory of that period erased for a fat fee. Out in theaters late last year.

"The Butterfly Effect" -- Through journals he kept as a boy, college student (and psychology major) Ashton Kutcher is able to re-enter his past, in an effort to change it for the better. Out in theaters now.

"Eternal Sunshine of the Spotless Mind" -- Jim Carrey and Kate Winslet are a couple trying to rescue their relationship by having their bad memories erased in this movie co-written by Charlie Kaufman ("Being John Malkovich" and "Adaptation"). Opens March 19.

"The Bourne Supremacy" -- When a Chinese political figure is executed, all signs point to Jason Bourne, which isn't good news for Matt Damon's character, who must finger the real killer. He must find the truth behind his haunted memories and answers to his own fragmented past. Opens in July. 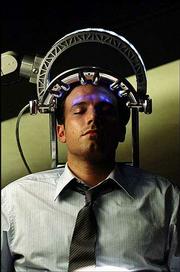 Ben Affleck plays Jennings in the movie "Paycheck," released in December, kicking off a spate of mind-bending movies set for release.

"The Manchurian Candidate" -- Denzel Washington, Liev Schreiber and Meryl Streep star in a Jonathan Demme update of the 1962 political thriller about brainwashing that starred Frank Sinatra, Laurence Harvey and Angela Lansbury. This time, the first Gulf War factors into the story rather than the Korean War. Opens later this year.

"The Notebook" -- An elderly man (James Garner) visits a nursing home to read entries from a notebook to a woman (Gena Rowlands) with Alzheimer's disease about a long-ago love affair in which they were involved. Opens in July.

"The Forgotten" -- Julianne Moore plays a woman reeling from the death of her 8-year-old son. But her psychiatrist says she never had a son and invented those memories. Opens Sept. 24.

It's not unusual for a spate of movies to deal with the same or similar topics. Summer 1998, for example, gave audiences dueling disasters in "Deep Impact" (comet) and "Armageddon" (asteroid).

Coincidence could be driving movies about memories, or real life could be seeping into reel life.

For one thing, it's a coincidence that all these movies on the same subject are coming out in such close proximity, says Steve Golin, producer of both "50 First Dates" and "Eternal Sunshine of the Spotless Mind."

They are being released within six weeks of each other, but the Carrey film began development in 1998, whereas the script for the Sandler picture came along in 2001, Golin said. "Eternal Sunshine" had to wait for screenwriter Kaufman, and then for Carrey.

"It's sort of like this: All of a sudden, there are five movies out about serial murderers or there are five movies out about rapists," said Stuart Fischoff, a professor of media psychology at California State University. "For some reason, something catches the eye or interest of people, so you get this spate of films which, if there's a similar gestation period of a movie, they're all going to come out around the same time."