Fox scrubs up for TV return

The actor, who left "Spin City" in 2000 after he was diagnosed with Parkinson's disease, guest stars as an inspiring physician in two episodes of the NBC sitcom "Scrubs" beginning tonight.

"I told him if he came back to TV and it wasn't 'Scrubs,' I'd kill myself," said Lawrence, executive producer of the NBC series.

When Fox told Lawrence he was feeling good and thinking about series work, he asked if "Scrubs" would be interested in having him. He didn't presume there would be a job for him, Lawrence said.

Fox, 42, has devoted much of the last few years to raising money and lobbying for research into his disease, which resulted in symptoms including tremors, stiffness and loss of balance.

The symptoms were not apparent during filming and no accommodation was required for him during production, according to Lawrence and NBC.

The Michael J. Fox Foundation for Parkinson's Research has provided $35 million for studies and expects to raise $10 million to $15 million more by spring. 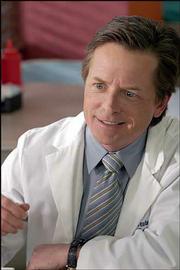 Michael J. Fox portrays Dr. Kevin Casey on the NBC comedy series "Scrubs." The actor, who left "Spin City" in 2000 after he was diagnosed with Parkinson's disease, guest stars as an inspiring physician in two episodes of the sitcom, beginning 8:20 p.m. today.

"It's looking good," Fox, interviewed by NBC, said of research efforts. The work done on Parkinson's overlaps with other diseases including Alzheimer's and multiple sclerosis, he said.

The actor, who gained fame with the sitcom "Family Ties" and the "Back to the Future" movies, has voiced animation roles in recent years including the "Stuart Little" films and "Atlantis: The Lost Empire."

He talked about his "Scrubs" appearance in the NBC interview.

"I don't miss working that much but ... there's nothing like the feeling of being with a bunch of people you know that are talented and creative and having fun," Fox said.

"I didn't want to do 22 episodes of anything, but to come in and do one or two episodes with Bill and this cast seemed like the fun thing to do."

In the "Scrubs" episodes airing 8:20 p.m. today and Feb. 17, Fox plays a surgeon who's afflicted with obsessive compulsive disorder but has found a way to make it work to his advantage.

His character serves as an inspiration to others at Sacred Heart Hospital, Lawrence said. He wanted to offer Fox a story with substance, knowing the actor would prefer it.

The hardest part, Lawrence said, was writing a script that allowed eager cast members a chance to work opposite Fox. The series stars include Zach Braff, John C. McGinley and Sarah Chalke.