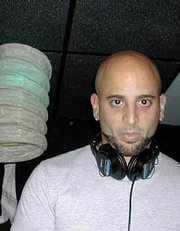 For those unfamiliar in the Junkyard arts, please prepare to be educated. Stepping up to their four decks with guitar and bass in hand (and a bevy of production equipment), Ming + FS whip their music into a mind-blowing frenzy, mixing razor sharp drum patterns with pin-point accurate scratching and chest caving bass. Ming, whose real name escapes us right now, spoke with lawrence.com from the Apple, as in Big, in order to edumuhcate a poor farmboy on Junkyard, homesickness, and of course, what makes Lawrence so great.

lawrence.com: Give me a Junkyard primer.

Ming: The easiest way to look at it is really, we're doing progressive hip-hop. ... The sensibility is really--we're taking any type of urban music and we're fusing it together to create a new style of hip-hop. Since hip-hop has been around for so long, it's kind of a basis of how our music is, so it's got jazzy elements, it's got dance elements, it's got different types of electronic elements, some rock elements, but mainly the core of it is hip-hop. And then we extend on that core, we kind of ice the cake with these different flavors, and these flavors would be the different types of, either dance music or rock or hip-hop or jazz or what not.

Ming + FS are known for their four-turntable presentation, as well as live instrumentation. Is it just the two of you on stage?

It is just the two of us on stage. I play guitar and Fred plays bass live right now. But on the next tour we're thinking about bringing out an MC and possibly a drummer. It really just depends how the finances for the year shape up, how many dates we're going to be doing on the next tour. We have an album coming out on June 22nd this year called "Back to One," and for that tour we may bring other people out with us. But primarily it's just been the two of us 'cause we're kind of like a band in a box.

So your rhymes up to this point have been sampled?

We take acapellas, whether the MCs have rapped on our own records or we get acapellas from other MCs, and we put them over remixes or beats that we create for the live performance. ... It's more like they're just like another instrument that we're using.

You're such a New York group. What do you miss most about New York when you're on the road?

... It's interesting, 'cause you're only in a town for such a short period of time that it becomes more of a sleep-deprivation thing. What you miss is like being able to have a full night's sleep, or good food, or not being in a smoky club or something like that. But you gain the excitement of being on stage, and tour life, which can be fun; stepping out of what you could be doing back home. When we're here we're mainly just producing in the studio. When we go out on the road we get to kind of leave that behind for a little bit and just focus on doing the live shows. For me it's a good combination of both.

What do you guys listen to when you're on the road?

You know, I tend not to listen to music when I'm on the road because my ears get so tired from being in the clubs every night. If we're traveling by van or by bus, probably whatever CDs we collect along the way. Mainly not electronic music, mainly we'd be listening to rock stuff. The road crew, they've always got something. The last tour we went out, we were listening to Poison the Well. ... We listen to a bunch of rock bands, hip-hop, whatever.

What do you suppose makes Lawrence, Kansas the most wonderful place on the globe?

... I think it's sort of like its own freak city. It's a place where people in that area can find a liberal place to be themselves, and it's been there long enough that it's more than just being able to do your own thing, it's kind of a way of life. ... For us it's sort of like a home away from home because we have good friends there, and something that we do there that we don't often do is we've gone and played house parties after we've done our sets. Usually we're just in and out, but the vibe there is cool and the kids are real, so it's made for a good time. Plus the drinks are f#@!ing cheap.