Blowout is one of those side-scrolling action games that comes along and wants to be your outlet to blow stuff up. As a matter of fact, it wallows in that reality so much that all other qualities that make a game enjoyable get completely ignored. 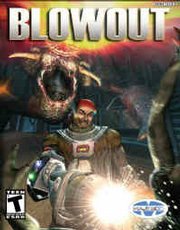 You, as the uber-tough John Cane, investigate mysterious alien activity on the Honor Guard space station. Things go awry with your cohorts and you must go it alone. Like most action games, the story is expendable, easily forgettable and never augments the gameplay by any stretch of the imagination...literally.

The left thumbstick moves you right and left, the right stick aims your weapon and right and left triggers fire and start your jump pack, respectively. It's an easy layout with a complicated learning curve. It's hard because the right stick that aims can be particularly sensitive or wonky, but never really feeling tight.

The weapons you come across are general in nature but do pack a solid punch. Unfortunately, the character and level design lack so much imagination that it hardly makes a difference what weapon you have. Levels are maze-like in nature with elevators leading to dead ends or more elevators and corridors. To ease the tedium of riding a butt-load of elevators, an automated woman's voice will every now and then remind you "Smoking is not allowed in the elevators" or a variant of that. It's an obvious tongue-in-cheek statement that happens too often and was never funny to begin with.

Not only that, but locked doors with a certain color will block your path several times during a level. So you must do a ton of backtracking to find that specific key to open that door. Since every corridor looks exactly the same, you will always consult your map to find out where the heck you are. Luckily the objective indicators show you exactly where the keys are, which in other games would reduce the fun of the journey. But in this case it makes a game that would be ridiculously tedious upgrade to just being obnoxiously tedious.

The graphics are basically compressed mud. It's a technique we saw in games like Medal of Honor: Rising Sun and Celebrity Deathmatch. But Blowout out-craps them both with an almost Game Boy four-shades-of-gray look with periodic bright greens, blues and reds for effect. (shown)

The soundtrack is your local Megadeth-worshiping middle school band that knows one decent riff and repeats it over and over with an embarrassing distortion tone. Couple that with a voice-over guide that states the obvious too late and sound effects that are as enveloping as a paper clip, and you have an audio experience that could only be ordained by a deaf bishop.

As you can tell, we really enjoyed Blowout. At an MSRP of only $14.99, who wouldn't want to check it out? But even if the Contra fan in you is just begging for more in that vein, don't even waste the money to rent Blowout.