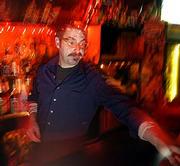 For places where people go to forget, bars sure make a lot of memories.

Like the time Weezer drummer Pat Wilson came in belligerently drunk after a show at The Granada, creeped out the bar's female patrons and finally left at the prompting of his band mates. Or the time a drunken frat boy brought his bike in and went on bloody joy ride down the stairs and out the front door. Or maybe when a gutter punk peed on one of the bartenders and pulled out a cheap kitchen steak knife, only to be tackled by a patron.

These and many more memories are sure to be talked about this weekend as The Eighth Street Tap Room celebrates its 10th anniversary. The two-level bar -- nondescript from the outside but beloved by its inhabitants for its smoky, dimly-lit charm and cozy booth-seating -- will be host to two shows in honor of the occasion: folk rockers Fourth of July and Pink Nasty on Friday and the overdriven Hyperspherian on Saturday.

Besides selling more Beamish and Pilsner Urquell than any other bar in town, The Tap Room -- or "Tapeworm," as some the bar's patrons affectionately call it -- is known for attracting a colorful cast of regulars.

"There might be somebody with red hair on one side, blue on the other, a biker, a suit-and-tie guy, but everybody's cool," said Vernon Brooks, a 36-year-old Union pipe fitter who has been shooting pool at the bar since it opened in 1994.

Initially known as a popular hangout for Latinos and international students (thanks in part to maiden manager Jon Jasmine, a Spanish major), the Tap Room began earning a reputation for putting on local music when manager Jeremy Sidener took over in 1997.

Sidener, who plays bass for Arthur Dodge and the Horsefeathers, and The Danny Pound Band, has helped make the establishment a regular haunt for local bands like The Mums, Santo Gold and Fourth of July as well as attracting touring acts like The Cherry Valence, All Night and Rockfour.

"I try and do shows that I think will be cool shows even if people don't come to them," Sidener said. "You can have a crowded show with not many people coming. You always have that vibe, like, there's people here that are watching this that are interested."

Though The Tap Room only has four to six live shows a month, the bar's extensive record collection ensures a constant and diverse flow of music. A glance at the record shelf reveals titles from the likes of The Impressions, Richard Hell and the Voidoids, Television, Talking Heads, The Clash, The Minutemen and Roxy Music.

"People that hang out in here will bring in a stack of records when they come drink and just leave them here," Sidener said. "Any time you reach in there you're going to pull out something pretty hot."

The venue has also played host to a number of billiards teams, some of which have gone on to compete at the national championships in Las Vegas. A series of plaques hang on the wall opposite the pool table, commemorating the accomplishments of each year's team.

"They're one of the only things in here that gets dusted regularly," Sidener joked.

Butch Clark, a 57-year-old retired carpenter, doesn't spend as much time at the bar as he used to on account of his wife and 9-year-old daughter. He might catch an episode of "The Simpsons" there now and again, but his days of hanging out with the late-night crowd ended one fateful evening in Dec. 1998.

"(My wife) came and got me out of that bar one night and said, 'You've been in this bar too long,' and we've been together ever since," Clark said. "But only because of that do I probably get to go back to it."