The Game Boy Advance doesn't get too many "M" rated titles come its way. And when it does, the result is usually paltry. However, Rockstar was tremendously successful in converting the now-classic Max Payne to the small screen.

The story is much the same. You come home. You find your wife murdered. You join the DEA with a vengeful bloodlust. You encounter much blood, drug dealers and other situations inappropriate for kids. 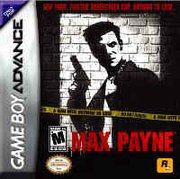 What's immediately amazing is how well the Matrix-inspired "bullet time" effect works so well on the GBA. Pressing the R button sends Max into a slow motion dive as you accurately pick off the enemies on screen. Using your bullet time drains your bullet time meter, so you will have to use proper discretion, especially since most rooms full of baddies prove near impossible without it.

Your weapons of choice are vast. They range from shotguns to double-fisted pistols and automatic weapons. The animations are of particular interest because of how smooth they are. Each flying body gives the illusion of a complex rag-doll physics engine usually only seen on consoles. Combine that with the amount of interactive objects on screen and bullet and blood residue that stays around and you have a sophisticated shoot-em-up experience that pleases on many levels.

Speaking of levels, there are twelve levels split up into three chapters. You have four lives per level. Losing all of your lives forces you to start back at the beginning of the respective chapter. Regardless, the adventure is pretty short. It can be blasted through in three to four hours. At times the game can get particularly challenging so it is worth its weight in gold for the first run through.

The graphics are quite nice and it's quite impressive how Mobius Entertainment, the developer, manipulated the GBA's capabilities to flawlessly toy with a quasi-three dimensional environment, even if viewed from the top down. Also amazing is the amount of speech that is included in the presentation and narration. Though it's highly compressed to fit on the cartridge, the sheer amount adds volumes to the experience.

Max Payne for the GBA kind of came out of nowhere, which usually is a bad sign. But Rockstar proves it knows how to make its presence known on the small screen with maturity, flair and fun.