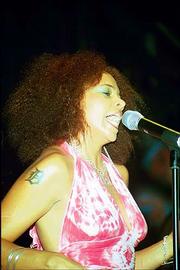 And on Feb. 22 and 23, the Atlanta artist will don yet another creative cap -- teacher.

Moore, 32, will visit Lawrence to work with two poetry circles sponsored by the Langston Hughes National Poetry Project, which is based at Kansas University. She plans to offer advice and feedback to local poets, said Maryemma Graham, KU English professor and director of the national project.

"Jessica is all about bringing poetry to the people," Graham said.

The Langston Hughes National Poetry Project is funded by a 2003 grant from the National Endowment for the Humanities. KU received the $225,000 grant after hosting a celebration of the 100th anniversary of Hughes' birth in February 2002.

The project sponsors poetry circles in 20 U.S. cities, focusing on the works of Hughes. The Harlem Renaissance poet spent some of his childhood in Lawrence, where Graham said he cultivated an independent artistic spirit.

"Langston Hughes was his own man and maintained his own ideals," Graham said.

Graham said Moore embodied a similar spirit, which made her a wonderful spokesperson for the project.

"She is a beautiful, strong, black woman who is supremely talented," Graham said. "But she has never sold out.

"People respond to that kind of conviction in a powerful way."

Moore, a native of Detroit, writes poetry that blends funk, hip-hop and rock with a Southern twist.

She has authored the play "Alpha Phobia" and the poetry collection "The Words Don't Fit in My Mouth." Moore's own publishing company, Moore Black Press, released the latter work in 1997. She started the company after growing frustrated with major publishing houses, which were slow to offer her a deal.

Her latest work, "The Alphabet Verses the Ghetto," hit stores in June 2003. The collection of poetry and prose explores themes of resistance, love and survival. It also gives readers a glimpse of how Moore see herself: "I got my momma's eyes and my daddy's guns," she writes.

Graham said Moore's greatest strength was her ability to keep her writing real.

"She doesn't have many barriers when she communicates," Graham said.

"She's very honest and open, which makes her a natural teacher," Cosby said.

When she's not writing or working with aspiring poets, Moore juggles a variety of artistic endeavors. She has appeared in several documentary films and played a lead role in the 2003 independent movie "His/Herstory." The soulful poet also performed on the syndicated TV show "It's Showtime at the Apollo" in 1995, which led to international opportunities in London, Berlin and Paris.

Moore is a freelance musician who writes her own music and frequently collaborates with others. She worked with popular rap artist Nas in 1999, appearing on his album, "Nastradamus." She also has teamed with musicians Antonio Heart and PBT.

Moore has a degree in journalism from Wayne State University and worked for Fox News and several Detroit newspapers before moving to New York City in 1995. There she became immersed in the poetry circuit, performing her work throughout the city. Graham said Moore's move to Atlanta was recent.

"I think Jessica was looking for a slower, more Southern pace of life," Graham said. "Atlanta is good for her art."

Cosby said 10 area poets had signed up to work with Moore at the Ninth Street poetry circle. There is no limit on the number of participants, Cosby said, but those interested should register by today.

Moore also will visit the Van Go Mobile Arts studio on Feb. 23. Van Go is a nonprofit agency that uses the arts to provide social services and job skills to at-risk youth, ages 14 to 21.

"She is a shining example to our kids," Green said. "Having an outlet for creative expression is very important for all children, regardless of background."

"If we can give these kids strong literary and communication skills, that translates into job opportunities," she said.

About 20 youth are slated to take part in Moore's Van Go visit.

Graham said Moore was especially interested in working with young people and was active in literacy programs.

"Jessica has done things on her own terms, and she wants to share that with kids," Graham said.