By By Erin Hanafy - The Associated Press

New York — It's clear there's something different about "Sex and the City" from the opening credits, as Sarah Jessica Parker struts down the streets of Manhattan wearing a tutu and manages to look chic. Lara Flynn Boyle was vilified for her tutu outing at the 2003 Oscars, but it works like crazy for her fellow triple-named star.

The HBO series initially got attention because of the characters' ribald talk and dating adventures, but its most enduring legacy may be its style. As the series prepares to say goodbye on Feb. 22, the fashion world might miss Carrie, Miranda, Samantha and Charlotte most of all. 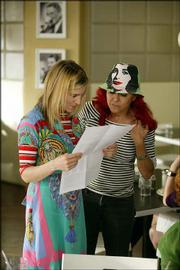 Sarah Jessica Parker and "Sex and the City" costume designer Patricia Field are shown in this undated photo. The final episode of the trend-setting series will air Feb. 22.

"Unfortunately we don't have enough Sarah Jessica Parkers in the world," says Andre Leon Talley, Vogue's editor at large. "There's going to be a big void when that ends. Who will replace her?"

Sex columnist Carrie (Parker) in particular personified the ultimate in urban style, especially to the legions of fans who live far from Manhattan and dream of tapping their stiletto heels down the city's streets.

When Carrie started wearing her nameplate necklace in the second season, the street style was soon seen everywhere. Carrie sparked another trend in the third season, when she began wearing a huge silk flower affixed to almost everything she wore. Viewers responded to her quirky sense of fashion, which even allowed her to lounge around her apartment in men's "tighty whities" without looking foolish.

Carrie's chameleon-like style -- mixing and matching bohemian, over-the-top sexy, romantic and even prim fashions -- reflects the restless energy of the character and the city she calls home.

"She is the essence of what the New York girl is all about," Oscar de la Renta says.

"I think that what is nice about how Sarah Jessica dresses is that one day she is in a rabbit coat, which is affordable to every woman, and (Manolo) Blahnik shoes, which are obviously not affordable to everyone," de la Renta says.

A recent episode featured an Oscar de la Renta dress as a plot point, and the designer says he sold nine of the $3,300 dresses at a trunk show in Palm Beach, Fla., the next day.

"Sex and the City" is a force in fashion now, but originally the influence went the other way. The world of fashion was never far away from Carrie, public relations executive Samantha (Kim Cattrall), upper-crust Charlotte (Kristin Davis) and lawyer Miranda (Cynthia Nixon). Costume designer Patricia Field helped create each character's look by painstakingly selecting the best pieces from each season.

"I think Pat Field did an exceptional job. That's hard work to go out to all the shows," Talley says. "I once went to visit the vans on the set when they were shooting on the Upper West Side on a spring day, and the wardrobe van was like a mini department store."

Fashion made its way into the plotlines as well, starting with an episode in the first season that popularized the term "modelizers," used to describe womanizers who pursued only models. New Yorkers' preoccupation with purses was a recurring theme, and in an episode in the fourth season Samantha uses new client Lucy Liu's name to get a red Hermes Birkin bag. She loses the client, and the bag.

Carrie's obsession with shoes -- which helped make Manolo Blahnik and Jimmy Choo household names -- was featured in two episodes. In season four, as she struggles to secure financing to buy her apartment, she realizes her huge collection of $400 shoes is worth more than enough for a down payment. Tatum O'Neal guest stars in the sixth season as a friend who's left her single days behind and "shoe-shames" Carrie about the $485 pair that were stolen from a party.

Carrie (Sarah Jessica Parker) and Aleksandr (Mikhail Baryshnikov) are shown in an episode from the sixth season of "Sex and the City" in which Aleksandr surprises Carrie with an Oscar de la Renta dress.

Carrie's relationship with writer Jack Berger in the sixth season was laden with fashion overtones, as the two have their first fight over a character in his novel who wears a "scrunchie" elastic hair band, something Carrie argues a New York woman would never do. Later, as the two get closer, Carrie shows him she's serious by taking him on a shopping trip to a Prada store.

Wearing a Dolce and Gabbana coat and not much else as she steps into the spotlight, Carrie trips in her towering heels and tumbles onto the runway.