When the lights go down on 'the city'

For six sometimes-sinful seasons, even singles have had a steady date every Sunday night.

That's when HBO's sultry "Sex and the City" foursome of Carrie, Samantha, Miranda and Charlotte strap on their Manolo Blahniks and esoteric designer frocks to meet for brunch and catch up on last night's action. 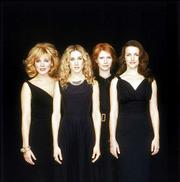 Although the Fab Four grapple with love, career and friendship in the shadow of Manhattan skyscrapers, their emotions, quirks and struggles ring true for modern women everywhere -- including Lawrence.

"What I love about the show is the fact that you feel like you're not alone if you're single," says Madinah Hazim, a Kansas University graduate student. "I think it's been really liberating for women. I'm sad that it's coming to an end."

Before the award-winning series calls it quits, though, a couple of Lawrence 30-somethings want to celebrate their connection with the show and bring a slice of its social scene to Lawrence with a "Sex in the Little City" party.

The shindig will go down Thursday at The Bella Lounge, a smoke-free bar that caters to an older-than-college crowd. The idea is to bring together singles near 30 and older -- women and men alike -- in a sophisticated environment where they can dress smart, enjoy cocktails and network.

More than just an opportunity to hook up, the party will be a chance for single women to find other single women for friendly outings like the kind enjoyed by the "Sex and the City" crew.

"We have so many single customers that are just amazing, fabulous women, well-educated, at a good point in their life," says Crowder, who lived single in Lawrence for most of her 30s before getting married a little more than a year ago.

"A lot of these women don't have a lot of single girlfriends, so even if they wanted to do something, they might not always know who to call."

Fashion for the masses

In true "Sex and the City" fashion, party organizers will pass out door prizes that include gift certificates for shoes, tanning, haircuts, makeup and jewelry.

Can you say "shopping spree?"

Each episode becomes a veritable runway show for top designers, vintage togs and creative accessories. But the characters' looks aren't just about expensive labels; they're about putting pieces together. Carrie gets pretty crazy (heels with gym shorts and a duster?), but her verve seems to have inspired everyday women to take fashion risks.

"The idea of fashion, especially like runway, it's not supposed to translate into the real world," Crowder says. "There are very few people in the world who can pay $10,000 for a gown or $2,000 for a blouse, but the beauty of it is it's just an inspiration and people can knock it off into something wearable and affordable."

Though fashion has sometimes driven plot during the show's six-season run (remember "A Woman's Right to Shoes"?), the textilian parade is often just eye candy dressing a show about deeper issues that resonate with viewers. Carrie's wreck-laden quest for the perfect man. Charlotte's divorce and ongoing struggle to conceive. Miranda's inability to be vulnerable. Samantha's difficulty facing 40 and, most recently, fighting breast cancer.

"It's four independent women living in a fast-paced city on their own. They lead fun, interesting lives, and they have problems just like any other women in relationships," says Kat Kiser, of Lawrence. "I don't follow a life plan according to 'Sex and the City,' but I like to watch it because it kind of reflects the period of time in my life I'm going through."

Kiser plans to watch the series finale with Hazim, who says the ultimate ending would include a reunion between Carrie and on-again, off-again beau Big and a pregnancy for Charlotte.

"The world stops when it comes on," Hazim says of the show.

Crowder watches with her husband but calls her best friend in Topeka immediately after every episode. She's not sure what to expect as the show says farewell, but she says last Sunday's episode felt forced, like a means to tie up loose ends.

However the writers choose to sign off, "Sex and the City" seems to have made a lasting impression with a core of fans who will likely invest in seasons one through six on DVD.

"We joke that we all want clothes like Carrie, an apartment like Charlotte, to be sexually in-tune like Samantha and have a career like Miranda," Crowder says. "If you combine them all, they kind of represent the epitome of what everyone seems to be wanting.

"That's the one thing I like about the show every week: You have these women who are amazing and complex, and they really celebrate themselves."