By By Bridget Byrne - The Associated Press

But wait! It's Chris Isaak.

On the "American Dreams" set, Isaak is recreating one of the historic moments of "American Bandstand," a regular feature of this NBC series chronicling the shifting cultural, social and political mores of the Pryor family of Philadelphia in the 1960s.

Teenage daughter Meg Pryor (Brittany Snow) and her pal Roxanne Bojarksi (Vanessa Lengies), both of whom are regular "Bandstand" dancers, are in the audience as "Orbison" sings his 1964 hit, now a classic.

"It's fun hitting the high notes," said actor-musician Isaak, who had recorded the song the previous day, with his brother, Nick, handling the famous Orbison growl.

Chris Isaak, whose own music can sound remarkably like Orbison's, performs on a set made to look like the Philadelphia studio where Dick Clark originally produced "American Bandstand."

"That's his real hair. Not a wig. How cool is that! Amazing!" exclaims Jonathan Prince, co-executive producer with Clark of "American Dreams," which airs 7 p.m. CST Sunday.

Beneath the thick helmet, Isaak wears Orbison's trademark dark glasses and black clothing, and his face has been lightened by makeup to achieve the Orbison pallor. 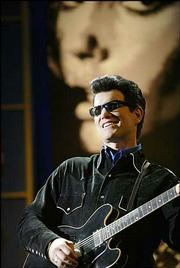 Chris Isaak as Roy Orbison performs in this scene from NBC's "American Dreams" in this undated publicity photo. Isaak is re-creating one of the historic moments of "American Bandstand," a regular feature of the series chronicling the shifting cultural, social and political mores of the Pryor family of Philadelphia in the1960s.

"I always loved Roy Orbison," said Isaak, star of his own behind-the-scenes rock series, now in its final season on Showtime.

Previous guest performers on "American Dreams" who have recreated the looks and sounds of earlier singers include India.Arie as Nina Simone, LeAnn Rimes as Connie Francis, Kelly Clarkson as Brenda Lee, Hilary Duff and her sister Haylie as the Shangri-Las and, earlier this month, Nick Lachey as Tom Jones.

The wardrobe, hair and makeup departments of "American Dreams," now in its second season, match up the era's look, not only for the musical guest stars but also for the show's regulars.

"The '60s is such a beautiful period, and we are right in the middle of it," said costume designer Vicki Sanchez, sitting in front of a rack that includes a fringed mini-dress worn by Jennifer Love Hewitt as Nancy Sinatra singing "These Boots Are Made For Walkin"' on a January show.

Hewitt is playing Sinatra again in Sunday's episode with Isaak as Orbison.

This time Sinatra is on a USO tour to Vietnam, performing for the troops, which include the Pryors' oldest son, JJ (Will Estes).

"It's a kind of really neat message and a fun thing to be part of -- to get to shake around, feel sexy, wear the boots and know I have all that power," she said.