Unreal 2 arrived on PC to mixed reviews but high acclaim among gamers. It was a wonderfully paced single-player experience that would feel right at home on the Xbox once it arrived, taking advantage of the hardware. 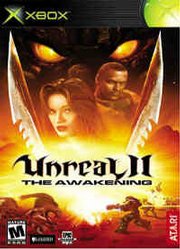 Tons of Halo fanatics were looking to Unreal 2 to bridge the gap since the PC version felt so similar to the Xbox's flagship title. The weapons "felt" good and the different types provided an impressive balance. Sure the voice acting sucked and the story was OK, but the graphics, levels and architecture were among the best seen in an FPS.

Fast forward to now. After many delays, the Xbox version is finally here. Sadly, the fun was lost in translation.

I don't know about you, but I like to have the ability to aim in my first-person shooters. Unfortunately this becomes a challenge since much of your time is spent battling the horrid framerate that dips well below 30fps all too often. Everything chunks. I am not sure why since the character models have lost the luster, lighting and overall polygons that could've easily been done on the box.

The character animations are what really bog down the fun factor. Many enemies animate with literally five frames in a given second. It looks like a bad E-card animation. Of course, impeding your progress further are horrendous load times during intense parts of a level. This is entirely unacceptable.

The draw distances are pretty poor as well. This is most obvious in the XMP multiplayer mode where learning the maps can prove difficult when you can't see what's up ahead. The developer may blame the lack of processing power compared to a PC but it's just lazy porting and coding.

The weapons are standard fare but have been fine tuned to "feel" good and react like they should. The assault rifle is coincidentally reminiscent of Halo's with regard to reaction and power, but the grenade launcher is the most versatile with several types of grenades to shoot. The non-personality that usually plagues the Unreal series weapons is thankfully not existent here. It adds to the replay value quite a bit.

In the XMP multiplayer mode, you can play over system link or Xbox live. You have to keep your base's artifacts from being taken all while managing vehicles and certain spawn points along the map. Unfortunately, the system link option is really buggy. It shows the other Xbox in the lobby and loads the game, but four of every five times, one Xbox will never finish loading and lose the connection. It's the only mode available which is pretty disappointing and can't compete with other shooters on Live.

I wanted this to be a solid port. I was looking forward to a robust multiplayer experience since I liked the way it felt on PC. None of my wishes came true. Atari can only hope to sell some units based on the name alone, because it deserves to get lost in the ocean of average first-person shooters.