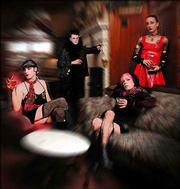 Rick McCauley/Special to the Journal-World

A torch singer steeped in the blues and a quartet of Ziggy Stardust disciples will share top billing at Saturday night's Douglas County AIDS Project fund-raiser.

"It's quite the eccentric pairing," Catherine Bolton, DCAP board member and event chairwoman, says. "And it's going to be fabulous."

Recording artist Kelley Hunt will make her 14th appearance at the benefit. The Emporia native and Kansas University alumna calls Lawrence home, but has been touring since early January. Hunt made sure, however, to reserve Saturday night on her backing band's busy calendar.

"I've played this gig every year since it started," says Hunt, who performs at Chicago's House of Blues tonight. "I can't imagine not being there."

"People started asking about it before Christmas," she says.

The popular candy-'n-hearts theme persisted until last year, when DCAP decided to shake things up a bit. The benefit adopted a new Mardi Gras motif, and Lawrence-based reggae ensemble Common Ground was brought on board to carry the party into the night.

"The combination of musical styles and the extended night were a big hit," Bolton says. "We were really happy with the response."

And so the Mardi Gras theme continues this year, with Hunt slated to deliver her signature smoldering set. But the dependable diva will have new company: Local glam band Vibralux will handle the fund-raiser's second performance, replete with makeup, lingerie and fiery props.

Event chairman Mark Batesel says the reigning shock-rock darlings of Lawrence stress tolerance in their music, making the group an ideal choice to perform at the fund-raiser. 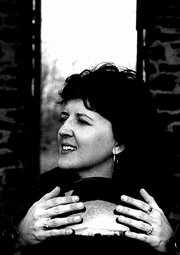 David Eulitt/Special to the Journal-World

"Our organization encourages people to accept others, regardless of sexuality or whatever might make them 'different,'" Batesel says. "It's an important message that Vibralux and DCAP share."

DCAP assists individuals and families infected and affected by HIV and AIDS in Douglas, Franklin and Jefferson counties. In 2003, the organization served about 70 clients and sponsored community outreach programs focused on HIV and AIDS education and prevention.

The organization hopes to raise $12,000 at this year's benefit.

"DCAP does great work, and they deserve every penny," says Hunt, who will release her third album in May.

Vibralux may not have Hunt's experience -- the band formed in 2001 -- but the envelope-pushing outfit will release its first album, "Trans-mission," in March. The record features 16 tracks, including cover tunes and original material.

"It's a record that channels our love for musical excess," says Mercury, who plays lead guitar in addition to his vocal duties.

The flamboyant frontman says the members of Vibralux love live performances, though he views the experience to be something like a first date.

"If the audience isn't happy, we feel fat," Mercury says. "And we know they're going to cheat ... So we're hoping the DCAP crowd will fall in love with us."