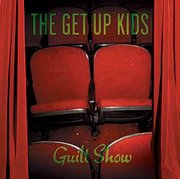 Much was made of how The Get Up Kids' last album, "On A Wire," marked a mature step forward for the band. The album received praise from Rolling Stone for its "softer singing, spacious guitars and prominent keyboards" but was decried by many of the band's fans for abandoning the aggressive, emo edge of its early albums.

Truth be told, "On A Wire" was a good record but maybe not the most exciting one. Too often it lingered in a mid-tempo alt-country vibe, rendering the songs sterile live and a bit tedious when sandwiched back-to-back on an album.

"Guilt Show" may very well be the "On A Wire" that GUK fans hoped to hear. It's smart, it's catchy and it's mature. But most importantly, it's fun.

In fact, "Guilt Show" is a perfect album for driving and cranking up the stereo or going for a walk on a sunny day. The feat is even more impressive considering the lyrics often deal with considerably darker subjects. "Trespass fits you like a charm/A scarlet letter on your arm," singer Matt Pryor sings on "Wouldn't Believe It," one of many songs that address themes of betrayal.

The act made a smart move to abandon "On A Wire" producer Scott Litt and return to Black Lodge Studios in Eudora, which the band now collectively owns. Producer Ed Rose crafts a powerful wall of sound with healthy doses of real piano, crunchy Telecaster guitars and a number of big drum sounds. At times, it feels almost like an authentic recreation of a GUK's live show.

The brotherly rhythm section of Robert and Ryan Pope is in top form, locking in with seasoned precision. Keyboardist James Dewees seems to play a larger part in the band's songwriting, adding layers of strings on top of tumbling piano lines.

The album smartly packs the biggest punches toward the front and saves the slower and more experimental material for the end. A song like "Dark Night of the Soul" wears the mark of long nights of studio tinkering with sundry sound effects and dense layers of screamed vocals.

Other highlights include the first single, "The One You Want," which is reminiscent of Wilco during a "Whoo hoo hoo" outro. The album closes with the furious "Conversation," which recalls the jagged guitar sound of Radiohead's "OK Computer."

Who's to say what "Guilt Show" will do commercially (or even what that would say about the album's merit). In the end, the only thing that matters is the music, and The Get Up Kids can be as proud of this album as anything they've done before.