By By Amy Potter / special to lawrence.com 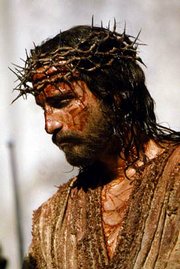 It's been almost 10 years since Dominic Dadzie has stepped inside a movie theater. There hasn't been, he said, a movie out worth his time.

"The culture we live in at the moment glamorizes sex," Dadzie said. "There are sexual undertones in many movies that come out from Hollywood."

That's about to change.

The 57-year-old Lawrence resident is making an exception Saturday to see Mel Gibson's "The Passion of the Christ." He's hoping the movie will bring to life the sacrifice of Jesus.

"Many a time we just read it and don't understand it," Dadzie said. "It gives you a clear picture of what really went on, to see the pain, the anguish of how much it cost him."

Dadzie is a member of Clinton Parkway Assembly of God, one of eight churches among the Lawrence Association of Evangelicals. The association has reserved all of the seats for two screenings of the movie. The group is charging $7.50 for a ticket to the film at 7 p.m. Friday and Saturday night at Hollywood-Southwind 12.

'Tells the truth'
Paul Gray, pastor of Heartland Community Church, said the idea was to give church members an opportunity to take their friends to see the movie.

"We knew tickets would be hard to get, so we pooled our resources to buy out two showings," he said.

Passion of The Christ **

Mel Gibson's controversial effort about Christ's final days and crucifixion plays like a blend of a political-theology lesson and a snuff film. While the filmmaker obviously invests a lot of conviction into recreating the authenticity of the era, his spiritual message is obscured by an unrelenting torrent of bloodshed.

Gray is one of two Lawrence pastors who attended a preview of the film in January in Chicago.

"I feel a sense of urgency for everyone to see it, not just those in Lawrence," he said. "The movie tells the truth about who Jesus is."

The Gibson movie is biblically correct, Gray said, unlike the earlier, more controversial Jesus film "The Last Temptation of Christ." That 1988 Martin Scorsese movie was roundly criticized by religious leaders as blasphemous.

John Tibbetts, associate professor of film at Kansas University, said he was amused by all the commotion surrounding the Gibson movie. But Tibbetts said it was nothing new. Every decade sees a religious movie made that brings to light the same controversies.

"I'm just amused that everyone thinks watching a darn movie is going to consign us to the flames of perdition," Tibbetts said.

Unifying force
He had not yet seen the movie but predicted it would do well the first couple of weeks it's in the box office.

"Beyond that, we'll see. Unfortunately we always have this herd instinct that everyone's got to see it," Tibbetts said. "What kind of chord it really strikes in the hearts of viewers can only be seen over time."

Jon Ratzlaff, general manager of Hollywood-Southwind 12, said he initially was surprised at the church group's request to buy out two of the weekend showings, which totaled 572 tickets.

"In all honesty, I originally didn't think to expect much," Ratzlaff said. "We've gotten so many phone calls about it."

The Lawrence Association of Evangelicals is the only group to buy out a showing at the theater.

The Rev. Leo Barbee Jr., pastor of Victory Bible Church, said the movie already had done much to unite Christians.

"So many people talk about the church being divided," Barbee said. "This is a way of practically demonstrating the oneness we have in Christ Jesus."

"Sometimes we have to see, and he (Gibson) is not holding back the graphics this time," Burwick said. "The truth is if we would preach that from the pulpit a lot of people would get turned off."

Gibson's film has come under fire not only for graphic depictions of violence, but also for perceived anti-Semitism. Some groups, such as the Anti-Defamation League, have taken issue with the depiction of the Jewish role in Jesus' death.

Abraham Foxman, the League's national director, has said that the film has "the potential to fuel anti-Semitism, to reinforce it."

Gibson has denied charges of anti-Semitism, saying he doesn't want "people to play the blame game." The film, he says, is about faith, hope, love and forgiveness," not blame.

The eight churches in the evangelical association each plan follow-up sermons relating to the movie.

Darrell Brazell, pastor of New Hope Fellowship Church, is doing a six-week series titled "Witnesses of the Passion," in which he will examine the life, death and resurrection of Jesus through the eyes of different characters in the Bible.

"The Passion of the Christ" opens Wednesday in Lawrence.

Dadzie said he hoped other reluctant filmgoers would make the decision to see the movie. He bought tickets for himself and his wife to attend the Saturday showing.

"I hope it will touch the hearts of other people," Dadzie said. "We are a people who are curious. I hope this time they see it and believe it."