Amy Bradley owes her notoriety in the quilting world to a pack of dogs.

The Lawrence designer has spent enough time at Bradley Animal Hospital -- owned by her veterinarian husband, John Bradley -- to have met more than a few choice pups with personalities and looks all their own. 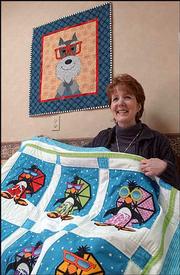 Lawrence designer Amy Bradley will be featured on HGTV's "Simply Quilts" at 7:30 a.m. Friday. Some of her designs are inspired by animals she meets at her husband's veterinary clinic.

As a surprise for John a few years ago, Amy designed and created an applique quilt that featured a dozen humorous canine caricatures, some based on actual patients at John's clinic. As fate would have it, the quilt has traveled to so many shows that it's never hung in the hospital.

At one such show in Houston, it caught the eye of producers for HGTV's "Simply Quilts," and they asked Amy to appear on the program.

Bradley will be featured on the episode that airs at 7:30 a.m. Friday on Sunflower Broadband Channel 45. She'll demonstrate how to applique a quilt block of Baxter, a miniature schnauzer based on a patient who always comes to the vet with "literally a suitcase full of toys."

"It is SO hilarious. Dogs are big and little and fat and skinny, and they definitely have personalities," Amy says. "It's just so comical. They're just like little people."

In addition to "Dazzling Dogs," Amy's "Kitty City" and "Scottish Dozen" will be showcased on "Simply Quilts."

A Medicine Lodge native, Amy has been quilting since 1986, but a year ago she started her own business, Amy Bradley Designs, to distribute her patterns. Her designs can be found at quilt shops across the United States and in Canada, Australia and New Zealand.

Amy recently hired her 23-year-old daughter, Ashley, to handle the business side of the enterprise so she can focus on creating new designs. Her son Adam helps package patterns for shipping.

"Now it's almost illegal because I'm getting paid to have fun," Amy jokes.

Bradley's dog and cat quilts are appliqued using fusible web and buttonhole stitch and then quilted. Her "Scottish Dozen" quilt is pieced.

"I want people to know I can do both," she says. "I'm not just gluing fabric."

All the patterns -- she also has "Penguin Paradise," "Spool Flowers" and "Spool House" in her repertoire -- call for colorful, vivid fabrics.

"They're so cheery and bright," she says. "They just perk me up."

She graduated from Kansas State University in 1983 with a bachelor of fine arts degree. She's had jobs in industrial design and display design but hadn't worked in the design industry since moving to Lawrence seven years ago.

She belongs to both the Kaw Valley Quilters and Topeka's Country Quilters.

She and her friends are planning a pajama breakfast party to watch Friday's early-morning broadcast of "Simply Quilts," which Amy taped a little more than a year ago.

Despite keeping busy with her newfound success, Amy still finds time to fill the cookie jar at the Bradley Animal Hospital front desk with homemade goodies each morning

And even though "Dazzling Dogs" has yet to hang in the clinic, Amy's creative touches -- antique furniture, dog and cat figurines, advertisements and wall paper -- have perked up an environment that otherwise could be pretty sterile.

"It was a little stark, a little plain," John admits. "It's really warmed up, which makes it a lot more comfortable for everybody."

His favorites among his wife's creations, though, continue to be the quilts inspired by his furry clients.

"Several of them are named after patients," he says. "That's, to me, what's so neat about the cats and the dogs is the personalities that are captured."