One woman's search for justice and a connection to her father are at the center of E.M.U Theatre's production of "V Henry K," a new political drama by Lawrence playwright Dan Born.

Born weaves historical accounts of the U.S.-backed coup in Chile during 1973, the bombings of Cambodia and Laos in 1969 and Sept. 11 into the fictional story of Dist. Atty. Penny Rose. Rose is indicting statesman Henry K, loosely based on former Secretary of State Henry Kissinger, for orchestrating the murder of her father 30 years ago. Questions arise in the course of the case as to whether justice can be brought to a man who seems outside its realm. 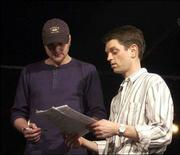 Penny's father, Manuel Ruiz, was a Chilean-born journalist, researching a story that would have connected Henry K to the coup in Chile that overthrew democratically elected Salvador Allende. Although Penny hopes to keep her relationship with the victim a secret, Henry K is aware of the connection and uses it to threaten her.

Act 1 ends with Sept. 11, and Act 2 explores the changes it brought to the political landscape. As criticism grows from the media for the indictment of an authority figure, Penny must decide whether to continue with Henry K's prosecution or give up her quest to bring her father's killer to justice. Along the way Penny enlists help from local media personality Tom Brixton and Ng, a Cambodian-American lawyer.

"The point of the play is not to defame Kissinger but to raise questions in the audience as to the effect on civil and legal society of granting safe harbor to a man like Henry K," Born said.

"V Henry K" is Born's third original play to be produced by E.M.U. Theatre. He began writing "V Henry K" after reading "The Trials of Henry Kissinger" by Christopher Hitchens in 2000. Born continued to work on the play in free time away from his job as a software engineer in Kansas City, but was unsure of how to end the story.

The inspiration for the play's ending came after Sept. 11, when authority figures ceased their inquiries into Kissinger's involvement in the 1973 Chilean coup.

Born has been a member of E.M.U. Theatre for three years.

The company was founded in Lawrence in 1998 and provides a venue for local, independent writers and actors to work collaboratively on original as well as well-established plays. Born has had writing seminars for the company and has co-directed past productions.